The gaming laptop Asus Zephyrus S GX701 will be available in Romania at prices starting RON 10,000 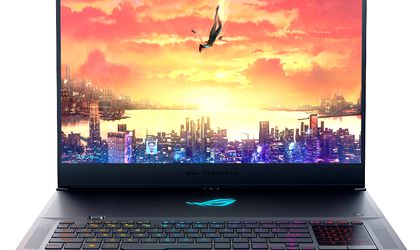 Shortly after being released at CES 2019, ASUS Republic of Gamers (ROG) was introduced in Europe for the first time in Warsaw. The new gamer portfolio includes ROG Mothership removable keyboard notebook, ROG Zephyrus S GX701 and GX531, thin portable notebooks, ROG G703 desktop replacement, and ROG Strix SCAR II and ROG Strix Hero II all equipped with state-of-the-art hardware, which improves the experience in the games of the moment.

Among the new gaming laptops, the first available on the Romanian market will be the Zephyrus S GX701, an ultra-slim profile model featuring NVIDIA GeForce RTX 2080 with Max-Q design and 8GB GDDR6 VRAM, Intel Core i7 processor from the 8th generation a 17-inch PANTONE Validated screen with a refresh rate of 144Hz and a very narrow frame, which will enter partners’ offerings starting February at prices ranging from about RON 10,000 (including taxes, the GPU version RTX 2060Ti).

The Zephyrus S GX701 is the most compact 17 inch gaming notebook and is also the thinnest, measuring only 18.7 mm. The laptop can be powered from the regular AC adapter required for maximum gaming performance and through USB Type-C (USB-C) input for everyday tasks.

The model uses for cooling the innovative Active Aerodynamic System (AAS), which has a wide inlet when the cover is raised to increase airflow. It absorbs additional air through the ventilation grids above the keyboard, and the dual fans propel it through four radiators and ventilation grilles at the rear corners to ensure Zephyrus S GX701 will remain cold under all conditions.

The Republic of Gamers family of GeForce RTX gaming laptops

After they’ve raised the bar for desktop performance and visual quality in general, the NVIDIA GeForce RTX 20 Series is ready to do the same thing on laptops. The new Turing architecture becomes furniture, and the Republic of Gamers has a diverse line to meet the requirements of the players. Being just simple implementations for the latest graphics, the portable new NVIDIA GeForce RTX from ROG showed the company’s commitment to improving every aspect of mobile gaming. Laptops have incredibly fast screens framed by thin frames, capturing even more players in virtual action.

Gaming enthusiasts have different priorities, so ASUS ROGs meet the requirements. For desktop replacement systems, performance is ahead of portability, the perfect ROG G703 example. Next to it joins the ROG Zephyrus S GX531 compact. ROG Strix SCAR II and Hero II take over their role in the eSports arena in a portable form, complete with competition hardware.

ASUS Gamers (ROG) announced Mothership (GZ700), a new desktop replacement that redefines the form of gaming laptops. Instead of sitting on the desk, ROG Mothership stands vertically to absorb more air in the advanced cooling system. The keypad detaches and folds to fit the different scenarios, giving users the freedom to find the perfect position, and the innovative design offers plenty of space to put all the speakers directly under the screen. The fabulous aluminum case fits a 17.3 “FHD FHD with a 144 Hz refresh rate, 3ms GTG response time and G-SYNC technology, based on the Intel Core i9-8950HK processor and features the latest NVIDIA GeForce RTX 2080 video card.

The ROG G703 is the benchmark of desktop replacement laptops

ROG G703 is based on the 8th generation of Intel Core processors, including the Intel Core i9-8950HK processor, factory-shifted at speeds of up to 4.8GHz.

Choosing a traditional 17 inch laptop format requires better cooling and a thicker case to get the same performance as its older brother equipped with larger ventilation holes. Larger radiators and fans are so effective that the G703 ROG G703 features a 144Hz refresh rate IPS panel, 3ms response time (GTG) and NVIDIA G-SYNC, allowing a fluid gameplay even with Ultra graphics settings.

The G703 also features HyperDrive Extreme storage that uses exclusive technology to combine three NVMe PCI Express (PCIe) SSDs in RAID 0 for read speeds of up to 8700MB/s, the fastest for a laptop.

Using a familiar design gives another type of versatility; the ROG G703 can be placed on the knee, which for some may mean the difference between fulfilling a deadline or not, especially when home or away. Despite the fact that it is rooted in its traditional format, the G703 still incorporates the latest technology and features to keep on top of the top.

Installing high-end components in an ultra-thin gaming laptop is extremely difficult, especially when looking for a sleeker case than before, but the Zephyrus S GX531 offers a remarkably compact body, a proof of the engineering capability of ROG. The thin exterior measures nearly 15mm and integrates a 15.6 “screen with super-narrow frames to fit the smallest fingerprint, so you can carry the portable bag in a more lightweight bag. There are several laptops on the market that can be bought for under $2000 and some of these laptops do not even come with a stand that would allow you to put your gaming console on it.

ROG Zephyrus S GX531 reduces its profile without altering specifications. Get the latest state-of-the-art components like the latest Intel Core i7-8750H processor, a premium 144Hz refresh rate display, plus other essential ROG features. They are crammed into a slimmer package that gives up some of the things that are available in the compact 17 “ROG Zephyrus S GX701. Zephyrus S is an alternative for people who prioritize portability over other features.