Teodor Blidarus, ANIS: In 2019, the IT industry will have between EUR 120 and 150 million in venture capital 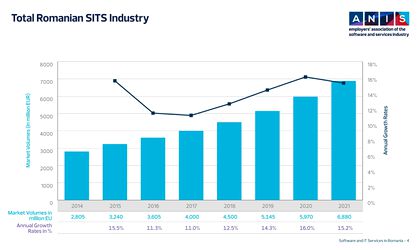 The IT industry (software and IT services) is one of the most dynamic in Romania, with growth rates higher than the economy. This year it will reach EUR 4.5 billion, equivalent to a growth rate of 14.2 percent for the foreign sector and 7.2 percent for the domestic one. But the industry is still far from what it would have been if it would have started from 1999 when it was supposed to.

“Back in 1999, when Radu Vasile was Prime Minister, a massive plan for IT industry development was made, with the help of the French professionals. An there were two major IT companies that wanted to come an invest in Romania, but they were rejected by the attitude of some official institutions (not the Government). If they would have started in 1999, the industry would be at least double in size today”, says Eugen Scwab-Chesaru, vicepresindent for CEE Operations at PAC.

The domestic software and IT services market (the internal consumption in this sector) was EUR 975 million, up by 2.1 percent, while the exports were up to EUR 3 billion. If the industry would have a start from 1999, not 10 to 15 years later, the number would have been double, as Chesaru shown.

The estimates of Employers’ Association of the Software and Services Industry (ANIS) for the next years are optimistic, comprising a growth of 15.8 percent for the foreign revenue in 2019 and 9.6 percent for the domestic one, so the total value of the industry would be up to EUR 5.15 billion. In 2021, the market value is estimated at EUR 6.8 billion.

“In order to grow faster than that, we need the help of the public sector, not only the private one. There are big projects to be made in the public sector and I’m not talking about routers and servers; unfortunately, there are no signs that these projects will be made”, said Teodor Blidarus, president of ANIS.

According to Blidarus, at the beginning of 2019 the industry will have between EUR 120 and 150 million in venture capital, seeking to invest in startups and innovation. “We didn’t have this kind of money five years ago, so it is easy to see how far we’ve come”, said the president of ANIS.

Romania is seen as the second supplier of software and IT services in Central and Eastern Europe, after Poland, and it is on the 6th or 7th place in Europe. This means that we are on the map and companies are looking to invest in Romanian firms.

There are 96.490 employees in the sector and it is estimated to grow to 124.750 by 2021. Romania in facing a deficit in the work-force, but we are not the only one; at European level the deficit of software and IT services employees is at 800,000.

“This means that if this year would appear from somewhere half a million specialists, the EU would be able to hire them all”, said Blidarus.

Also, going back to 1999, if the industry would have been started 20 years ago we would have not lost so many specialists.