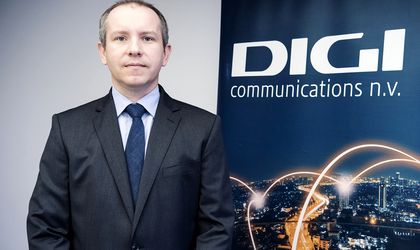 Digi Communications Group N.V. released on Thursday, November 14th, the financial results for the third quarter of 2019, announcing a 10.9 percent increase in revenue over the same period of last year, from EUR 270 million to EUR 299 million.

“We are pleased with the results registered by the group, first and foremost, thanks to our customers who have continued to choose Digi services, in all markets in which we operate. In the third quarter we increased the base of services offered by 7 percent compared to the same period of the previous year. At the same time, revenues and adjusted EBITDA (excluding the impact of IFRS 16) increased by 16 percent, thus maintaining the upward trend.

We have accelerated the investments in important projects for the evolution of the group in all the markets where we carry out operations. The launch of 5G services in June 2019, followed by the expansion of the 4G offering in 900 MHz band and a sustained increase in mobile data traffic for all Digi users, demonstrates our commitment to the continuous improvement of mobile communications services. We continue to expand the fixed services in Romania, Hungary and Spain, as well as the development of the mobile network in Hungary. We thank all our customers, employees, investors and partners for their support and confidence in our business vision, ”said Serghei Bulgac, CEO of Digi Communications Group.

Romania remains the main market of the group, generating 63 percent of its revenues, in second place being Hungary (with 18 percent), followed by Spain (17 percent) and Italy (2 percent).

In Hungary, the revenues of the Digi Hungary subsidiary (including Invitel) increased to EUR 163.6 million, and Digi strengthened its position as leader of the cable television market (30 percent market share)*. In the segment of fixed internet services, Digi is the second operator (with a market share of 24 percent)*, while in the segment of fixed telephony services it has a market share of about 23 percent*. In May, the Hungarian branch of the group also launched its own mobile telephony services, at 2G and 4G standards, and also marked the introduction of the Digi own brand phones on the Hungarian market.

Spain registered a significant increase, of 42.5 percent, as concerns the number of subscribers of mobile telephony services, raising from 1.2 million RGU, on September 30, 2018, to 1.8 million RGU, on September 30, 2019. Digi Spain has positioned itself as the leader of the MVNO (virtual operator of mobile telephony services) market and is the fifth mobile operator on the Iberian market. At the same time, in the segment of fixed services (internet and fixed telephony), Digi Spain reached 68 thousands RGU, in the third quarter of 2019.