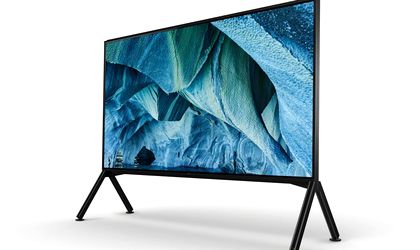 Sony Europe announces the release of the new MASTER series TVs, the ZG9 8K HDR Full Array LEDs and the AG9 4K HDR OLED. Sony’s MASTER TV range is the flagship in terms of image quality and the MASTER label applies only to the best Sony TVs and guarantees premium image quality, color, contrast and clarity at levels close to those of professional monitors. MASTER Series TVs feature the Netflix Calibrated Mode and IMAX Enhanced functionality to deliver the content as designed.

Both new models incorporate the latest generation Picture Processor X1 Ultimate for precise detail and contrast. Introduced last autumn in the AF9 and ZF9 models in the Master range, this processor plays a critical role in making high-quality images of this series. Picture Processor X1 Ultimate has a unique algorithm, specially created for 8K, capable of intelligently detecting and analyzing each object in the image, which translates into great detail and contrast for a more realistic picture and a more accurate representation of what they have wanted to convey content creators.

Premium quality sound is also a key component of the viewing experience, and both the ZG9 and AG9 models feature the new Sound-from-Picture Reality technology, which reproduces the position of the sound accurately on the screen so when the actors speak, to come directly from them and not from a speaker at the bottom of the TV.

Oversized TVs are becoming more and more popular, and with the new 98-inch and 85-inch ZG9 models, Sony aims to maximize the experience with very large screens in the living room. To provide premium image quality on such large displays, Sony introduces greater resolution with its first 8K HDR television to the consumer market. With a number of horizontal and vertical lines twice as high, 8K resolution offers four times as many pixels than 4K (or 16x Full HD resolution). This high resolution gives you a deeper viewing experience, so large 8K TVs are as close and remote as you can.

But it is not only the resolution that matters. As screen sizes grow more and more, the processor plays an increasingly important role in providing premium image quality. Using a proprietary algorithm, the powerful X1 Ultimate image processor has been optimized to manage the 33 million pixels of the 8K TV. The same processor captures the newly developed 8K X-Reality PRO technology to bring any video content close to 8K quality using a new 8K dedicated database to make scaling up more accurate and detailed. With a long history and expertise in the development of professional cameras and cameras, Sony recognizes that precision in the construction of signal processing components immediately determines visible differences across the image.

In addition, new fully-dedicated 8K technologies have been developed for the ZG9 Series, such as the Backlight Master Drive with full-array local dimming and 8K X-tended Dynamic Range PRO. The Backlight Master Drive on ZG9 has ultra-dense LED modules that are independently controlled so they can make unprecedented contrast with brilliant brightness and absolute blackness. To get the most out of this backlight system, the 8K X-tended Dynamic Range PRO uses the energy saved to intelligently amplify brightness in areas where it needs to be enhanced.

Proper sound positioning is another key factor as TVs get bigger. Considering the experience gained through Acoustic Surface Audio on OLED TVs, Sony extended the concept to the ZG9 Full Array LED (full-face) TV with Acoustic Multi-Audio. To provide realistic sound experience “from the picture” the ZG9’s new Acoustic Multi-Audio incorporates four front-facing speakers: two at the bottom and two at the top – to provide a true sound positioning. Users will hear the sound as if it came from the screen, not from where the speaker is. In addition, the ZG9 has a central TV mode for those who have a home cinema setup – so the TV becomes the central speaker. Dolby Atmos 1 also enhances your listening experience by adding a richer, louder sound field. (1 available through an upcoming system update.)

The ZG9 features the X-Wide Angle feature that ensures image quality and color fidelity, regardless of the viewing angle, reducing color changes when users view the screen off the optimal axis. X-Motion Clarity also minimizes the blur motion effect without sacrificing screen brightness.

The AG9 is the new 4K HDR OLED Range, available in 3 models, 77 inch, 65 inch and 55 inch, being particularly thin. The images come alive with a wide viewing angle, precise contrast and OLED technology that delivers deep blacks. Over 8 million pixels with their own illumination are precisely controlled individually by the X1 Ultimate image processor. In addition, AG9 has the Pixel Contrast Booster function for enhanced contrast and colors in high-bright areas. As a result, the AG9 delivers premium image quality, approaching that of a professional monitor that displays the images and colors in their original form as designed by the creator. The processor enhances SD and HD content, bringing it closer to 4K HDR quality and rendering 4K HDR content to amazing clarity.

Acoustic Surface Audio + delivers an immersive audio experience, the sound coming from across the screen. Thus, users have new entertainment experiences, with images and sound in perfect harmony. In addition, the TV has a way to make it the central speaker in a home cinema setup.

AG9 has a reduced thickness; when mounted on the wall with the SU-WL8502, is 2 times less wall-to-face than the previous model3. In addition, in order to provide the best viewing and flexible use, the SU-WL850 has a rotating function so that the TV’s position can be adjusted according to the user’s preferences (2 Available separately 3 vs. AF9 with a compatible.)

For picture quality, the AG9 combines 4K clarity with the brightness, color and detail of the High Dynamic Range (HDR). The areas previously hidden by the shadow and the sunlight are now clear and detailed. Like ZG9, the AG9 has the Netflix Calibrated Mode, IMAX Enhanced, Dolby Vision, and Dolby Atmos functionality to deliver a true-to-life experience for artists.

IMAX Enhanced content, including a selection of Sony Pictures Entertainment world-class box office hits, such as VENOM, Spider-Man: Homecoming and Jumanji: Welcome to the Jungle, will be available this year on some BRAVIA TVs streaming RakutenTV. At launch, the IMAX Enhanced program will be available in 5 countries across Europe: the United Kingdom, Spain, Germany, France and Italy, and several countries will be included in the future.

Both ZG9 Full Array LEDs and AG9 OLEDs feature Sony’s Android TV that supports a number of Google Play applications, including YouTube, Netflix, Prime Video and more (availability varies by region.) For a TV and an even smarter home, ZG9 and AG9 incorporate Google Assistant. In addition, TVs can be used hands-free with the microphones included. Users can talk to the TV using Google Assistant to quickly plan the day, discover content, or play TV, movies, and more. (Google Assistant availability depends on the region.) The TVs are compatible with smart speakers such as Sony LF-S50G and SRS-XB501G, Google Home or Amazon Echo devices. With smart speakers, users can control their TV and transmit content using their voice – more features will be added this year.

For a more enjoyable experience, a new, easy-to-use smart remote lets users control connected devices, such as satellite signal receivers, Blu-ray players, game consoles (supported devices vary by region) without changing the remote controls. It uses the radio frequency so that the TV can be controlled without turning the remote control towards it. In addition, the new user interface provides quick and easy access to your favorite applications and settings.