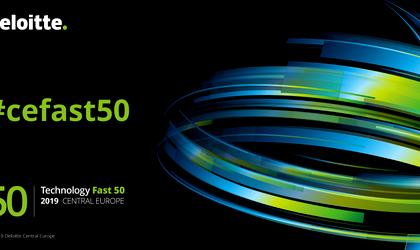 Software companies are dominating the Deloitte 2019 Central Europe Technology Fast 50 ranking, with 31 entries from eight countries in this year’s competition. The media and entertainment field is the second best represented in the ranking, with ten companies, while the hardware and the fintech sectors bring nine entrants together. This year, Lithuanian software company Voltas IT leads the charge in the main ranking with 5.7 percent growth in revenues between 2015 and 2018.

“With nine countries represented in the main ranking, the companies included in Deloitte 2019 CE Technology Fast 50 registered an average growth of 1.1 percent between 2015 and 2018. This is the fourth consecutive year that the average growth rate has broken through the 1,000 percent mark, a result that underlines the sustainability of the technology industry in Central Europe,” Deloitte representatives said in a statement.

This year’s winner was Voltas IT, a company founded in 2014, which has developed an affordable and easy-to-use automotive diagnostics system for drivers to use every day.

The following two companies in the 2019 Technology Fast 50 ranking are two Czech businesses: Prusa Research, one of the most consistently innovative companies in the global 3D printing industry and last year’s winner, with a growth rate of 4.5 percent, and BLINDSPOT, a developer of customized solutions using Artificial Intelligence (AI), with a growth of 4.4 percent.

“This edition of the Technology Fast 50 programme brings high and valuable understanding about the evolution of the Central European tech ecosystem and hints about the market in the years to come. The powerful representation of software businesses in the ranking mainly originates from traditionally well-anchored countries in the technology field – The Czech Republic, Hungary, Poland. This year, we also distinguish smaller countries in the region – Estonia, Bosnia and Herzegovina or Slovakia -, which suggests that new technology powerhouses may be on the rise in the Central European area,” said Dinu Bumbacea, Consulting Partner-in-charge, Deloitte Romania.

The Rising Stars category rewards younger businesses with a strong growth, likely to feature in the Fast 50 ranking in years to come. Of the 18 companies in the final listing, companies serving the fintech sector took the first two places. The winner is FF Trader from the Czech Republic, which has developed and launched a unique educational platform for traders in the financial markets.

The Big 5 category is dedicated to fast-growing larger companies whose scale makes it difficult for them to compete in revenue growth with smaller businesses in the Fast 50 ranking. The winner this year is Prusa Research, which also came second in the overall ranking.

The Most Disruptive Innovation award, introduced by Deloitte in 2016, recognizes businesses whose inventiveness enable them to develop solutions with the potential to disrupt established markets and value networks. This year’s winner is Croatia’s Rimac Autmobili. This company manufactures electric hypercars (a design concept car with an aerodynamic body and an ultra-light construction) and provides complete technology solutions to global automotive manufacturers.

The Social Impact Award rewards companies whose products or services contribute to achieving at least one of the United Nations’ Sustainable Development Goals 2030. This year’s winner is Warsaw Genomics, from Poland, a genetic-testing company that reads human genes to identify the errors responsible for many diseases.

In order to be considered eligible for the main CE Fast 50 ranking, companies had to meet several financial criteria: have a minimum of EUR 50,000 annual operating revenue in the first three years (2015-2017) and at least EUR 100,000 in 2018, be headquartered in Central Europe and own proprietary intellectual property or proprietary technology.