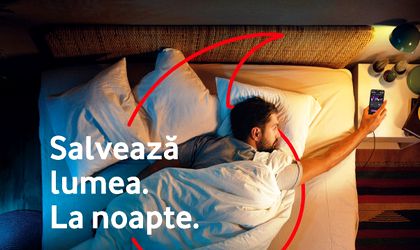 While they are sleeping, smartphone users in Romania can contribute to cancer research by downloading the DreamLab app. This app, which helps with the development of complex studies in the oncology field, has a Romanian version that can be downloaded from the App Store or Google Play Store and is compatible with iOS 10 operating systems or later and Android devices with “KitKat” v4.4 or later.

DreamLab is a mobile app that accelerates cancer research by connecting the processors of users’ smartphones into a network. Oncology researchers have developed a sophisticated algorithm that relies on artificial intelligence to analyze complex data, which requires very large processing power. While the phone is connected to electricity and has internet access, the DreamLab app uses its processing power to solve calculations that help cancer research projects, then sends the results back to the respective research institute via cloud technology. For example, a personal computer working 24 hours a day would require 300 years to analyze all the information needed for such a study, while 100,000 smartphones, each running 6 hours every night, could achieve the same results in three months time.

“I believe each of us knows someone who suffers from this condition. The World Health Organization representatives estimate that, in Romania, the number of deaths caused by oncological diseases will reach almost 60,000 by 2040. DreamLab gives us all the opportunity to use technology for good deeds. All we have to do is let our phones contribute to cancer research, while we sleep, thus helping accelerate studies to find life-saving solutions for many. At Vodafone, we are optimistic that we can use our technology and connectivity to create a better future. This project is part of our mission to support the development of a digital society, where Vodafone deploys technology to enable a better and healthier living for all”, said Murielle Lorilloux, CEO Vodafone and UPC Romania.

After downloading the app, users can choose from a list of research studies available at the moment the one that they wish to contribute to: malignant tumors – deciphering genotype-phenotype correlations (Garvan Institute of Medical Research – Australia), genetically personalized drugs for anti-cancer treatment (Imperial College London – UK), genome architecture for the development of personalized medicines for cancer patients (Istituto Firc di Oncologia Molecolare – Italy).

In order for DreamLab to work in Romanian, users must have the phone set in this language before downloading the app. Users can make the download for free, but, once installed, the app will generate data traffic. Vodafone Romania supports the DreamLab project by granting free national data traffic for operating the app to all its subscribers. DreamLab app does not have access to any information belonging to its users.

DreamLab was launched by the Vodafone Foundation and the Garvan Institute for Medical Research in Australia in November 2015 and was subsequently adopted by the Vodafone Foundations in New Zealand, UK and Italy. To date, the application has been downloaded for more than 320,000 times and has contributed to solving two research topics related to the fight against cancer.

Decode, in Australia, is the first project decoded by using DreamLab app. The calculations were finalized in February 2018 and it is estimated that the app has halved the time required for data processing. The results of the project show correlations between the type of cancer a person suffers from and their genetic profile, taking a first step in developing personalized treatments based on genetic information.

In July 2019, the decoding of the project DRUGS led to the publication of two new important discoveries – firstly, the identification of hundreds of anti-cancer molecules present in everyday foods, including orange, cabbage and grapes, and secondly, the anti-diabetic and anti-microbial potential of drugs used in anti-cancer therapy.