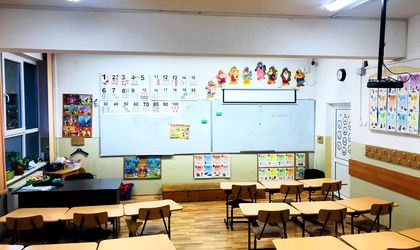 Telekom Romania is thus expanding the list of smart solutions implemented in Alba Iulia, adding a Smart City solution to its portfolio after the Smart Education solution that consisted in the implementation of electronic records in 18 schools in the city in 2017. School Nr.7 Mihai Eminescu is among these schools.

“This project is a new step in our Smart City project development strategy at the national level and reflects our position as a supporter of digitalization and modernisation of the Romanian educational system. I’m glad that Telekom Romania’s experience in developing and implementing smart technologies has positively impacted the creation of a better learning environment that stimulates pupils’ performance. We will continue to develop Smart City solutions in Alba Iulia, where we have another ongoing project – a video surveillance system for the city– that we hope to deliver soon,” said Ovidiu Ghiman, chief commercial office Business Segment at Telekom Romania.

The smart lighting system implemented by Telekom Romania includes LED lighting units that allow the control of light intensity and flow in the school, depending on the time of the day and season. Energy consumption and related cost cuts for the school are among the system’s benefits. The system allows the adjustment of the lighting depending on the natural light intake in every room and the lights turn off automatically during breaks. The corridors were equipped with dimming LEDs with sensors, which turn on and off while walking and the bathrooms have lights that turn on when they are used and turn off when no one is around.

The smart lighting solution also has benefits for the learning process. Creating a balance between the exterior and interior light through pre-set lighting scenarios stimulates pupils’ attention, concentration capacity and motivation.

In order to test the advantages of smart lighting for the quality of the learning process, the system was initially installed in two of the 28 classrooms and two other rooms represented the control group. The quality of ambiance and the performance of the pupils who studied in the classrooms with intelligent lighting were compared with those in the classrooms with traditional lighting.  The lighting system in the whole school was later replaced with the smart solution provided by Telekom Romania.

The smart lighting system is part of a set of initiatives through which Telekom Romania contributes to the modernization and digitization of the educational system in Romania. Thus, in 2017, Telekom Romania with its partner Adservio equipped 18 schools in Alba Iulia with an integrated educational system that includes license for the educational management platform Adservio: „The Electronic Catalogue” and 690 tablets for teachers, equipped with mobile data SIM cards with data traffic.