Simtel Team posts a turnover of 37.6 million lei and a net profit of 3 million lei at the consolidated level in the first half of 2022 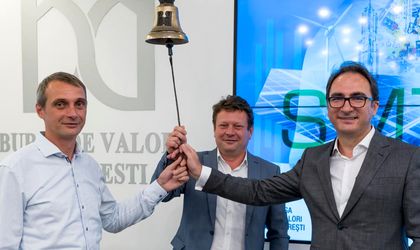 Simtel Team (BVB: SMTL), a Romanian engineering and technology company listed on the AeRO market of the Bucharest Stock Exchange, posts, at the consolidated level, a turnover of 37.6 million lei in the first semester of 2022 and a net profit of 3 million lei. The green energy division had the most significant contribution to turnover, with 85%, telecommunications accounted for 14%, while other business lines contributed 1%.

“The increases recorded in the year’s first half are in line with the current context. Rising energy prices have led more and more companies to implement renewable solutions, such as installing photovoltaic panels. In the first semester of 2022, we signed 55 new contracts which target the installation of photovoltaic power plants with an installed power of approximately 31 MWh. 41 of these contracts were signed in the second quarter. In the first half of the year, the client portfolio expanded with 44 new clients from diversified sectors. Also, in 2022, we changed how a project is billed by introducing four installments in line with which project is implemented, and therefore we no longer expect only lump sum upon completion. This new invoicing model will help us avoid the seasonal nature of receipts, considering that in 2021, approximately 40% of the turnover was invoiced between November and December. However, considering that the new invoicing method was introduced only for new contracts, it will take some time before we see a stabilization of revenues between quarters,” stated Iulian Nedea, co-founder and CEO of Simtel Team.

Telecommunications contributed 14% to the total turnover and generated approximately 5.1 million lei in the first six months of 2022, compared to 3.7 million lei in the first half of 2021. In the first part of the year, the company successfully implemented a power supply solution for a mobile telecommunications site in Romania, operated by Vodafone, together with GenCell, a leading supplier of hydrogen and ammonia-based electricity solutions. This is a unique project in Romania, which produces energy from hydrogen by cracking liquid ammonia. The share of the other business lines remained insignificant, representing 1% of the total turnover, in line with the percentage recorded in the first six months of 2021.

Simtel signed contracts with 63 clients and who have an approved financing contract through the Electric Up government project for a total power of 5MWp. The revenue forecast by the company regarding these contracts is approximately 22.5 million lei.

At the end of June, Simtel completed the share capital increase operation by raising 12.8 million lei. The funds will be used in a proportion of 50% to support the ongoing projects at the level of the company’s three business lines and those forecasted for 2022. The remaining 50% will be allocated equally for the development of electricity storage projects to balance the national energy system, the completion of the software application for monitoring stations for charging electric cars, the development of own photovoltaic projects – land purchase, project development, construction, commissioning as well as investments in R&D for the development of autonomous robots for logistics, through Advanced Robotics. In this company, Simtel Team owns 51% of the shares. For the next period, the management of Simtel aims to continue the company’s development, including expanding it outside the country.

“We want to open a branch in the Republic of Moldova, having already signed contracts representing investments of over 500,000 euros. Outside the European Union, the country has certain customs peculiarities we cannot cover in Romania. In addition, we also target the opening of a branch in western Europe. In the coming years, we strongly believe in energy storage, whether with Li-ion or hydrogen batteries. In this direction, we are developing specific services and products,” added Iulian Nedea.

Considering the intense activity from this year, the accelerated expansion both at the client and projects level, started or in the preparation stage, and the increasingly high demands for the company’s services in the field of renewable energy and telecommunications, the Simtel Team management maintains the budget for 2022, which targets operating revenues of 103.7 million lei, EBITDA of 14.9 million lei and a net profit of 11.6 million lei.

Simtel Team is listed on the AeRO market of the Bucharest Stock Exchange as of July 1, 2021. Currently, the company has a market capitalization of approximately 213 million lei.