Safer Internet Day: Millennials are the most exposed to online scam losses 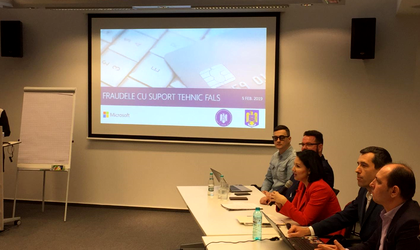 False technical support frauds are conducted by cybercriminals who claim to provide technical support on behalf of a technology vendor (eg. Microsoft) and scam people using computers, laptops, etc. Victims are approached out of the blue under the pretext of the urgent need to repair a false technical problem identified on the device they use. Impostors operate through global call-center networks and intermediaries and use various approaches: phone calls (usually landlines), pop-ups, e-mail, social media and online chat.

According to a worldwide study published by Microsoft in September 2018, 63 percent of technology users were targeted by such fraudulent action, 1 in 5 people continued to interact after initial contact, and 1 in 10 also suffered material damage, directly or indirectly. The most exposed to loss were the Millennial generation (24-37 years). Every month, Microsoft receives 11,000 fake reports with false technical support claims coming from around the world.

A limited number of such cases have been reported in Romania. In most cases, people targeted by cyber aggressors have been contacted on a landline. Victims are most often elderly people, likely to believe false scenarios. Those who call are English speakers and use concrete facts in conversation to build a more credible profile. Of the cases reported to us in the country, the Romanian Police estimated that 10 percent involved financial losses.

In the strategy to combat these fraudulent situations involving false technical support, prevention is key. Campaigns and awareness events are the main means by which cyber scams can be prevented. At the same time, in order to protect consumers from these attacks, Microsoft allocates specialized resources to develop tools and technologies to identify and block fraudulent sites. If the event has already occurred, victims should promptly bring to the attention of qualified specialized bodies, which also devote resources to investigating deeds and accountability at national and international level.

“Scam campaigns in Romania have grown in recent years and this phenomenon is noticeable by the high number of notifications CERT-RO receives on the main channels of communication. There is a need for close and effective cooperation on the part of awareness between the public and the private environment. Therefore, today’s meeting can be a model to be followed in the future,” said Catalin Arama, general manager of CERT-RO.

“Although there are not many cases registered in Romania, Microsoft is a company that is extremely concerned with the safety of users of its products, as well as establishing and maintaining a relationship of trust with them. In partnership with CERT-RO and the Romanian Police, we want to inform users about this type of deception, to prevent them from falling victim to people who are falsely represented as Microsoft’s representatives,” said Magda Popescu, Microsoft Corporation lawyer, Digital Crimes Unit.

“Crime Prevention is one of the tasks of the Romanian Police. The Institute for Crime Prevention and Research is constantly concerned that, through its activities, it will provide citizens with solutions to problems with Today, today’s activity is a good practice model in the field of inter-institutional cooperation. Even if we do not have an alarming number of cases in Romania, together with our partners, Microsoft and CERT-RO, we want to inform citizens that such crimes can occur, but by awareness of the dangers, we can avoid falling victims,” said Chief Police Commissioner Ramona Dabija, director of the Institute for Crime Prevention and Investigation.