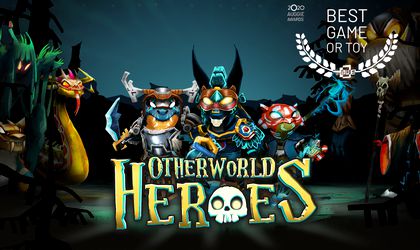 Swedish-based Bublar Group is moving forward with the soft launch of the location-based massively multiplayer online role-playing game (MMORPG) Otherworld Heroes, with Romania as the next market. The outcome of the first user acquisition campaign demonstrated good potential and the game won a prestigious Aggie Award in Silicon Valley in May.

Otherworld Heroes is a technologically advanced online game where the GPS positions of the players are shared between them in real time and visualized on the imaginative mobile map where the whole world is the playing field. Over the summer, the game was test launched with Sweden, Poland and Indonesia as the first markets.

“We are happy to take the next step in our soft launch plan adding Romania to our test base. There is great interest in mobile games in Romania, and we see it as an interesting market. The feedback we received from our enthusiastic players, along with the data we have now collected from the test launches, is paramount in preparing the game for the bigger roll out to the major commercial markets,” said Wictor Hattenbach, Game Studio Director at Virtual Brains Game Studio, Bublar Group.

The outcome of the first user acquisition campaign was evaluated from the Swedish user base. The latest statistics validate the data collected from previous beta tests, demonstrating good potential – Retention Day 1: 37.7%, Day 7: 17.0% and Day 28: 6.6%, compared to the industry standard for the best performing games in the role-playing game genre mobile, which is for Day 1: 35%, Day 7: 11% and Day 28: 4%. Additional countries in Asia and Europe will be added gradually.

Players can work individually and together to solve missions, fight enemies, and gather resources to advance through the game’s different dimensions. The soft launch is taking place in different phases on the iOS and Android platforms with a focus on testing, evaluating and improving technology, gaming experience and monetization for the commercial launch.

The game can be downloaded on the App Store and Google Play.