Yahoo! back on messaging segment with new Together app 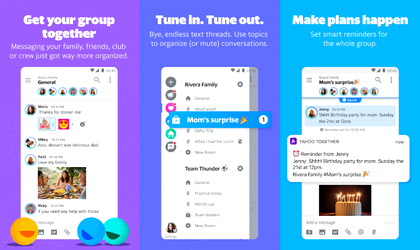 Yahoo! has announced its return to instant messaging through the launch of Yahoo Together, where users have the ability to organize group conversations into separate topics and set smart reminders about upcoming events, TechCrunch reports.

Yahoo’s old Messenger was shut down over the summer after most of its users had abandoned it.

Together has most of the regular features of other messaging apps, such as chatting, sharing photos, GIFs, links, documents and reactions – but Yahoo is trying to push its organisational abilities as well. However, some have argued that it’s a rip-off of Slack and other similar apps and pointed out that Yahoo has had multiple massive data breaches in the past.

Smart reminders are one feature that Yahoo Together can call its own, according to The Verge. Users can set a smart reminder for any message in a chat, and at the chosen time, everyone in the group will receive a notification about it.