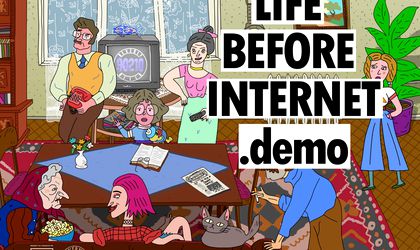 A team of artists and programmers from Romania and UK worked in the last months at a video game that shows how life was before the Internet. Created for the ones born in the digital era, Life Before Internet tells the story of a young girl disconnected from the technology. The team gathered stories and memories related to the life in pre-Internet Romania and transformed them into a video game that passes the user through the experience of a day in the year 1994. Starting the end of August, it was launched for a period of a time a demo version of the first games in the series Life before Internet, a test period in which the public that wants to test the game can tell its creators what experience they have.

“What do you do in the game? With the tools you had back then you resolve problems and adventures that are just a click away. The family and the neighbors make you miss the last episode of Beverly Hills that is on the TV only on Sunday. You cannot talk at the phone from the living room with your girlfriend without being heard by all the people in the household. Life before Internet takes the years before we had e-mails and smartphones and retraces the life’s tempo of those times in order for us to understand how much and when we changed so deeply,” explained Ioana Paun, one of the project’s initiators.

The games put you in the front of some life situations from that period of time: to change money in coins for the public phone, to walk around the city until you completely lose yourself and to handle the last positions on a film photo camera, to play back the audio cassettes with the pencil and, waiting at the doctor, to play Tetris in order for the time to pass faster.

The games are available at http://ioanapaun.com/life-before-internet/.

The project is the initiative of the artists Ioana Paun and Sillyconductor, joined by the game designer Mona Bozdog, lector in Immersive Experience Design at the Abertay University in Scotland and the coder Catalin Boitor, as well as the visual artists Lucian Lupu, Adrian Cârciova, Fabiola Pascu and Irisz Kovacs.

The work for the project started with a research stage addressed to those who were youngsters in the period ’90-’95. It included collecting some photos and stories, communication and living objects specific for that period, that were included in the technology based by Internet – pager, fix phone, fax, letters, telegrams, cassettes, diskettes, walkman, game and video consoles, etc. – as well as the research of the archives of that period: publications, magazines, cassettes, etc.

„Life before Internet” is a cultural project financed by the Ministry of Culture through the program Access Online and is co-financed by the Administration of the National Cultural Fund. The project doesn’t represent necessary the position of the Administration of the National Cultural Fund. AFCN is not responsible for the content of the project or the manner in which the results can be used. Those are entirely the responsibility of the financing’s beneficials.