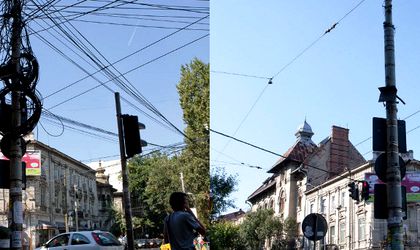 The construction works for Netcity metropolitan infrastructure for fiber optic are running at an unprecedented pace, reaching more than 50 kilometers of underground infrastructure per month . Works are currently in progress in Tei – Colentina, Berceni – Aparatorii Patriei and Titan-Industriilor areas, new works being planned in Cotroceni neighborhood. The current works are in an advanced phase of execution and sum up about 200 kilometers of underground telecomunications network.

The company plans to expand the construction works at full speed in all sectors of the capital city, aiming to reach as soon as possible the indicators of the Stage II feasibility study recently approved by the City Hall of Bucharest.

“Achieving the goals of Stage II is a priority for us, for which we have thoroughly prepared and which requires a significant mobilization of resources. The forecast looks good already, the design phase for Netcity 2020 investment already has a significant advance, allowing us to accelerate the construction works. Our efforts in the successful implementation of the project aim to provide the city with a modern infrastructure, ready for new technologies, and to help more and more people benefit from telecommunication services under quality and safety conditions,” said Adrian Răcăşan, CEO Netcity Telecom.

In April 2018, Netcity Telecom, member of Electrogrup Infrastructure | E-INFRA holding increased its  EUR 36 million club loan facility, contracted in December 2016, with a new facility of EUR 10 million, by entering into an agreement  with a syndicate of two banks – the Romanian Commercial Bank (BCR) and BRD Groupe Societe Generale, to ensure the necessary funds for the development of the project. Taking into account the current construction pace, Netcity Telecom estimates that by 2020 the private investment will exceed EUR 70 million.

Netcity Telecom was founded in 2007 and is the operator of the Bucharest metropolitan fiber optic telcommunications network “Netcity”.

Netcity Telecom is part of Electrogrup Infrastructure | E-INFRA, a group of five companies active in the field of energy and telecommunications infrastructure, which includes Electrogrup SA, Direct One SA, Nova Power & Gas SRL and also WESEE SRL, where the group has a participation of 40 percent.