NASA Space Apps Challenge, the largest global hackathon in the world, which is at its tenth edition globally and the sixth in Romania, kicks off registrations 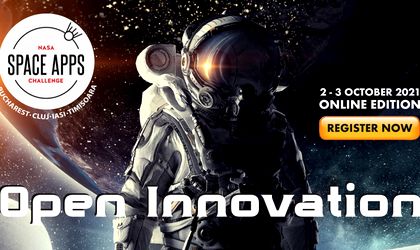 NASA Space Apps Challenge opens the registrations for the tenth edition of the hackathon that will take place on October 2-3, online, simultaneously, in four cities in Romania, as well as in hundreds of other places around the world. The theme of this year’s event is “The Power of Ten”, celebrating the ten NASA Space Apps editions held so far, dedicated to innovation, collaboration, and community.

The theme of this year’s event is “The Power of Ten.” This year, Space Apps will add four new thematic categories, which brings up to ten the number of global awards. The award categories will be announced in the coming weeks. Enthusiasts are also invited to take inspiration from NASA’s Space Apps Challenge Youtube videos.

Scientists, entrepreneurs, designers, engineers, technology enthusiasts, storytellers, manufacturers, builders, etc. worldwide are invited to participate in the NASA International Space Apps Challenge. For 48 hours, they will access NASA’s open data and work together to find ingenious solutions to real-world, Earth and space problems that NASA is proposing to be solved in this edition of the hackathon. The projects submitted will be evaluated by the space agency experts and the winners of the ten global awards will be selected.

In Romania, the hackathon will take place online in the cities of Bucharest, Cluj-Napoca, Timisoara and Iasi.

In Romania, the largest hackathon in the world is organized by de ROTSA, ClujHub and DiFine PR and will take place online in four cities. The people who are interested and wish to participate can go to the web pages dedicated to the cities of Bucharest, Cluj-Napoca, Timișoara and Iași and fill in the registration application. Dedicated pages can be identified here. The registration form is available here. More details about this year’s event are available here or on Facebook here.

“NASA International Space Apps Challenge multiplies the creative intelligence of tens of thousands of people around the world, who then think and build a better world together. The diversity and complexity of the challenges that NASA proposes each year are extremely stimulating and mobilizing. I have always been excited by innovation and idea-sharing, and I have always sought to be at the center of it all. So I am happy to support Romania’s participation in the biggest global hackathon in the world, unique through the collaboration it fosters and through how many minds and communities it brings together. This is how we grow a new generation of talents and specialists, who are thus learning to bring all their resources together because global problems can only be solved globally “, said Tudor Pasc, Project Manager for NASA Space Apps Challenge in Bucharest, Cluj-Napoca, Timișoara, Iași & Managing Partner ClujHub.

In 2020, four teams from Romania qualified for the international judging stage of the competition.

In 2020, Space Apps enjoyed approximately 26,000 participants internationally, and they produced 2,303 projects. The full list of 2020 hackathon finalists is available here.

In 2020, in Romania, the hackathon was organized in Bucharest and Cluj. Two teams from each city qualified for the international judging stage of the competition. The two teams from Bucharest are Fire Fighters (with a solution for the automatic detection of natural hazards) and Carbon FUN (with an application that monitors the carbon footprint based on transport and energy consumption). The teams in Cluj Napoca who qualified are IOT4NATURE (with a solution that detects the presence of smoke and flames generated by fires and sends information to the cloud to alert the authorities and the citizens of affected areas) and PAN (which creates automatic predictions on animal migration to signal any changes in the respective ecosystem). Two local awards were also presented to the Tandem and Penteract 3.0 teams, respectively, for fighting vegetation fires solutions.