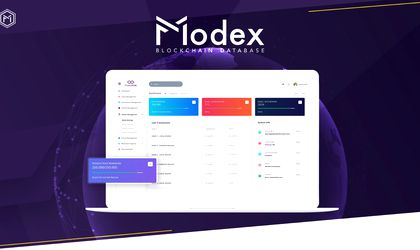 Blockchain company Modex has announced the launch of its blockchain-based database platform – Modex BCDB – which is aimed to simplify blockchain development. In addition to the platform launch, Modex is also announcing that among their pilot enterprise customers is Dietsmann, the global leader in energy maintenance and operations.

The company says that the Modex BCDB platform enables companies to set up blockchain projects in a few hours instead of days or even months as has been the case with other solutions.

“With the launch of Modex BCDB, we’re excited to usher in a new era of enterprise blockchain adoption. We’ve developed Modex BCDB specifically with enterprise needs in mind in order to counteract the high barriers to adoption that have typically kept businesses on the sidelines,” said Mihai Ivascu, the CEO and founder of Modex.

While blockchain can solve a number of complicated issues related to security, auditability, and more, long development timelines and large consulting fees have remained major barriers to blockchain adoption. By simplifying the way enterprises can deploy blockchain technology, Modex BCDB enables enterprises to get up and running with blockchain projects in days instead of months, and at a price point that small and mid-level enterprises can afford.

Modex BCDB is designed as a middleware that is installed between clients’ software and their existing databases, connecting them to the blockchain with minimal effort and without requiring additional training for software developers working in clients’ companies, as the platform has a similar interface as traditional databases. BCDB also allows companies to easily grant data permissions based on their employees’ needs and in line with regulations such as GDPR or HIPAA.

Netherlands-based company Dietsmann, a major player in the global oil & gas industry, will be among the first companies to use Modex BCDB.

“In the past 40 years we’ve managed to gain the trust of the biggest players in the oil & gas, nuclear and mining industries, operating globally in hard conditions and delivering the best maintenance solutions. Today, trust is the new currency and we are glad to strengthen it through more efficient data processing and the delivery of superior results for our clients, teams and the environment. Blockchain is among the revolutionary technologies that will bring indisputable benefits for Dietsmann Data Lab and will help us not just better secure sensitive data, but also open new ways of collaboration with our main clients and suppliers,” said Peter Kutemann, President and founder of Dietsmann.

Modex BCDB has been deployed to customers across the financial, retail, transportation, healthcare, public administration, and energy sectors.

Last week, Modex was awarded the Tech Innovation award at the French Chamber of Commerce and Industry in Romania (CCIFER) Gala for its Modex BCDB product.