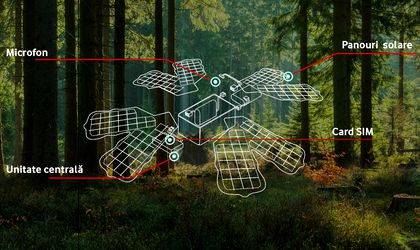 Vodafone announces, for the first time in Romania, a smart forest project, connected to the Supernet network. The forest, located in Covasna County, was equipped with a system for real time monitoring and warning on sounds specific to forestry operations, which helps fighting against illegal logging.

The project is part of Vodafone’s mission to protect the environment and a call for solidarity to defend Romania’s forests against illegal deforestation, in line with the brand’s new global position announced today, “Together We Can“.

„Romania is among the few countries in Europe that can still be proud of its virgin forests. Unfortunately, they are in danger of destruction. One of Vodafone’s commitments is to protect the planet and to use technology to make a positive impact on society, to contribute to change and progress, to connect people and society for a better life and for a sustainable future. The solution we are launching today responds to an immediate need to prevent illegal logging and to be able to intervene in a timely manner to protect the last secular areas, but also to a long-term goal of action against climate change. Taking care of the planet’s future is a responsibility for us all – authorities, companies, environmental organizations and citizens, and each of us can contribute to this goal through responsible behavior and joint efforts”, said Murielle Lorilloux, CEO Vodafone Romania.

The smart forest solution implemented by Vodafone is based on the system developed by the non-profit start-up Rainforest Connection. The system communicates with the Vodafone network and consists of a series of devices called “digital guardians”, equipped with acoustic sensors that capture a wide range of sounds from the environment. The captured data is sent, via the Internet, to a cloud platform, equipped with Artificial Intelligence. The application analyzes in real-time the information received and, if noises such as chainsaws, cars etc. are detected, which could indicate possible suspicious activities, it also sends real-time alerts to an application installed on foresters’ phones and/or to a regional or national monitoring center.

The solution allows forest managers to listen in real time the noise and to intervene promptly in case of danger. The devices are installed in the upper segment of the trees, in a non-intrusive way, are equipped with their own solar panels that provide them energy and are protected against bad weather. A single device has a coverage radius of 1Km and can prevent the deforestation of over 3 Km2 of forest.

„The project that we have announced today demonstrates once again how technology can contribute to solving a real problem Romania is facing: the uncontrolled deforestation. We will never have enough rangers to fully protect our forests, but we can have enough digital guardians to detect and notify us as soon as there is a real danger of illegal deforestation. Our solution is based on real-time capture, with the help of the Vodafone network, of sounds specific to deforestation actions (chainsaw, motor etc.) and their recognition through artificial intelligence, followed by sending alerts to people and authorities in charge for intervening in order to stop the deforestation. The solution we bring today is complementary to the measures already taken by the authorities because it intervenes in the initial stage of detection and alarming inside the forest, before the deforestation takes place”, stated Cătălin Buliga, Chief Technology Officer, Vodafone Romania.

„Together We Can” – the new brand vision of Vodafone

Vodafone announced today on a global level the new brand vision: „Together We Can”, through which it continues its mission of contributing to a digital society where nobody is left behind, while also reducing the impact on the environment.

Thus, Vodafone emphasizes the role each individual can have for changing society for the better, with the help of technology. Vodafone’s new brand position is inspired by consumer research carried out by the company, which revealed how technology has evolved from something that simply excites people on a personal level, to an essential component in making a difference on issues such as sustainability and societal development.

Under the “Together We Can” promise, the company will continue the deployment of Gigabit networks, enhancing connectivity to people and communities alike, embracing communications technology to reduce Carbon emissions, and supporting education, health and wellbeing to create a more inclusive and sustainable society.