Indie Games Marathon: the latest titles from Romania and Eastern Europe can be seen for the first time at Dev.Play 2021 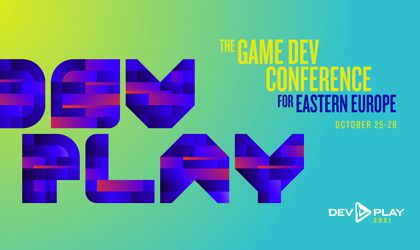 Dev.Play, the game development conference for Eastern Europe, brings a new concept for the 2021 edition: a streaming marathon of independent video games developed in Romania and the region. Dev.Play will take place exclusively online on October 25-26, 2021 on www.dev-play.ro  and is dedicated to game developers, investors, publishers and professionals interested in the video game development industry.

On October 26, Dev.Play is hosting an indie video game streaming festival: a 10-hour marathon where video game enthusiasts and developers will be able to watch gameplays from 20 independent games developed in 2020 and 2021. Indie studios from Romania and Eastern Europe can apply, only unpublished games or games released after October 2020 are eligible. The show will be presented by well-known gaming content creators from Romania and will be broadcast worldwide on their streaming channels (the stream language is English) and on the Dev.Play platform. Game developers can register for the festival by filling out the form here. Public participation in the festival is free of charge.

This year’s edition of Dev.Play is dedicated to independent video game developers. On the first day which will be dedicated to industry talks, several Romanian and international indie video game developers will talk about their success stories: Johannes Roth from Mimimi Games (the developers behind the well-known games Desperados and Shadow Tactics) will show how the grants offered by the German federal state helped the video game industry to take an important step and also helped the studio self-publish their first game ever. Liviu Boar (Stuck in Attic) will talk about the incredible experience he is living as we speak, his studio is running the most successful Kickstarter campaign ever made by a Romanian video game studio. The studio’s new game, Near Mage, was funded in less than 24 hours and has already attracted more than $90K, with 2 weeks until the end of the campaign. George Lemnaru, CEO and founder of Green Horse Games comes to Dev.Play to tell the story of his studio from its founding with the help of an angel investor in 2013 until December 2020, when he sold most of the shares of the company to the well-known British publisher Miniclip with an undisclosed record amount for the local industry.

Other important names in the local and international video game development industry will take to the virtual stage of Dev.Play and their names will be announced in the coming weeks.

“Dev.Play continues to find new ways to strengthen its position as a promoter of Romanian and Eastern European video games around the world. It is very important that the projects of independent studios are supported, this helps them become competitive on the global market and in the long term, this contributes to the growth of the entire sector in the region.” said Cătălin Butnariu, founder of Dev.Play and president of RGDA.

Dev.Play will offer great visibility for Romanian and Eastern European games on the Steam platform. During the week of the event, several video games developed in Eastern Europe will be promoted on the front page of the Steam platform to millions of users around the world. There will be games that are already popular on Steam and will be available with considerable discounts during this period or games to be released soon. The Eastern European games will benefit from discounts of up to 80%.

Dev.Play will continue to include already traditional elements, such as business matchmaking, a virtual exhibition, pitching opportunities for video game developers and more.

Tickets are available on the Dev.Play website. Access to the event can be done through the Content Pass, which is for the first time free of charge. Anyone interested in the industry that wants to listen to the live talks at the conference can do so by registering for free with a content pass. The list of other subscriptions dedicated to developers can be consulted on the site.