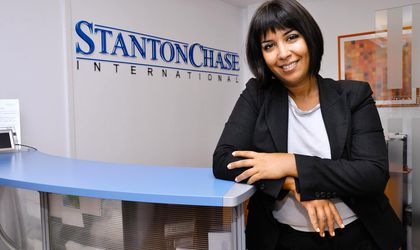 Globally regarded as the matchmakers of the labor market, the concept of an executive search agency has yet to be fully assimilated locally, Athena Tavoulari, regional manager of Stanton Chase International and managing director of its Bucharest office, told Business Review. Against this backdrop, local headhunters witnessed their business plunge by up to 70 percent last year.

It is estimated that the global executive search market fell by about 30 percent last year. What was the situation in Romania?

Indeed, globally the market has decreased by about 30 percent, but in Romania it went down by as much as 70 percent. At the beginning of 2009 the market experienced the psychological effect of the crisis, especially in Romania which was a country that had registered constant growth until that time. Afterwards the market simply froze.

Many clients have dropped anything that had to do with executive search and executive recruitment and not because they didn’t need such services. The positions that remained vacant weren’t filled, with companies choosing to divide the responsibilities of the vacant position between other members of the organization, in order to cut costs. Given this context it was only natural that the executive search market would fall in 2009.

Companies from industries such as financial services, banks and leasing companies have actually frozen the recruitment process and made no placements whatsoever. Other industries were affected as well.

Is the Romanian executive search market different from other countries in the region and in Western Europe?

Regionally, and I’m speaking mainly about Romania, Bulgaria and Serbia, and in some cases even in Greece we have seen that due to the crisis the market has become more price-sensitive, whereas this was not the case before the crisis. Speaking locally, the executive search market is not yet as educated about and accustomed to the concept as Western European countries are.

Romania is a market that does not yet fully realize the difference between a recruitment agency and an executive search one. However, this does not apply to big multinational companies present in the country or to the very big organizations that we usually work with. This is why there is a big difference in fees, because there is also a big difference in the value added that a client is getting through an executive search agency compared to a middle management recruitment agency. In this sense and as the market has become very sensitive to fees it has become more than ever our challenge to educate the market.

In recent months many companies have decided to bring in foreign executives. Can this be related to the current economic context?

This has always happened in Romania and is a clear trend of an emerging market but it will surely change in the coming years. From our experience, a common reason given by clients for choosing an expat it that the kind of knowhow they were looking for could not be found locally. I don’t think this is directly related to the crisis because the difference between the remuneration package of an expat and that of local CEO is at least two or three times higher. On the contrary, I would say that the crisis has created more opportunities for local C-level executives.

What are the main reasons behind an executive’s decision to change employer?

A survey carried out earlier this year by Stanton Chase among 200 local C-level executives showed that 47.6 percent of the respondents would change their employer for career development reasons. The second reason, for about 12.5 percent, would be dissatisfaction with the current employer along with improved remuneration, also 12.5 percent. Usually, these people are looking to do something more challenging, more motivating and on a larger scale. In my view, the money doesn’t usually come first in an executive’s decision to change his or her workplace. Moreover the salaries of C-level executives haven’t been affected by the crisis and some companies have even chosen to motivate their executives through aggressive bonuses.

What industries have resumed recruiting for executive positions?

The most notable signs of recovery have come from the financial services sector, mainly banks, although it has not yet fully recovered. So far we have been assigned more than ten projects in this field. We have been assigned positions that have included members of the executive committees, marketing, legal, IT and operations positions, so C-level or director level positions. Other industries are technology, both IT and telecom, and the consumer products industry. Our name in the Romanian market is very much connected to FMCG, we work a lot with these companies and we expect the growth to continue in 2010.

What results did Stanton Chase register in 2009 and what are your predictions for 2010?

At Stanton Chase we saw a decline of almost 50 percent in 2009 as companies active in industries that we are very strong in, such as financial services, consumer products and technology as well as pharmaceutical and healthcare, were greatly affected by the economic downturn.

In the first six months of 2010 we achieved the revenues of the whole of 2009 making it an increase of more than 90 percent. We continued to be close to our key clients as well as doing a lot of business development activities which resulted in some very important new projects, some of which are at an international level. We also managed to register a placement rate for the first six months of almost 94 percent when the global average is 80 percent. So we remain optimist and confident in Romania’s potential to become a stronger regional center.