HTC and NOD launch VIVE, the complete VR system for home-users and professionals 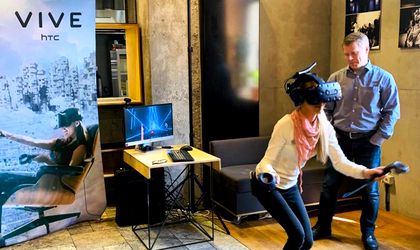 If you have seen the 2009 movie ‘Surrogates’ with Bruce Willis you may have wondered how will the future look when we will be able to send in the outside-world an surrogate robot that we control from home through a sort of VR lens. Well, that future is not here yet, so we don’t know how it will be, but steps are made in that direction, the latest being the introduction of HTC Vive virtual reality system.

“The applicability of virtual reality systems is very large, including sectors from architecture to tourism and health,” says Madalin Timis, academy manager at NOD.

The beginnings of VR headsets, years ago, with biggest issues being the room scale, meaning that the user could not move because it was entering in the dead zones of the sensor. The problems were solved in time and, now, the HTC VR system includes sensors that can cover even a 10×10 meters surface, without any blind spots. Which means it can be great for gaming, but also for creating or visiting museums.

The system includes an adjustable tape and can be used with a pair of eyeglasses. It also features face protection to increase comfort during use and includes a frontal camera (allowing augmented reality scenarios or the possibility of seeing real world breaks during the VR experience).

The kit also includes two wireless connection and vibration feedback controllers that can be used with a single charge for up to 6 hours and two sensor stations. They cover a 360 degree panorama of space used and can be placed on any surface or installed on standard stands (not included in the package).

HTC VIVE is sold for RON 2,799 and is already available on the Romanian market.

Alongside VIVE, today’s presentation included the latest version of VIVE Pro, a complete solution for VR professionals. This includes the VIVE Pro headset, two wireless controllers and two enhanced SteamVR base stations with increased space coverage. VIVE Pro comes with dual-OLED displays for a larger image resolution of up to 2880×1600 combined, representing a 78 percent increase over the original VIVE system. In addition to these visuals, VIVE Pro comes packaged with a pair of high performance integrated headsets and a built-in amplifier that creates a great sense of presence and sound. These graphics and audio enhancements allow users to experience the VR at a higher level, making them experience the most realistic virtual experience on the market today.

In addition, it was presented VIVE Wireless (powered by Intel WiGig), which offers a Vive and Vive PRO gaming experience with almost null latency.

Installing the VIVE wireless adapter starts by installing a PCIe card in a PC, followed by attaching a sensor antenna that spreads to and from the new VIVE wireless headset. The adapter has a 6 meter radius, a 150 degree field of view from the sensor and runs in the 60 GHz interference-free band using the Intel WiGig specification, which, combined with the DisplayLink XR codec, means a reduced latency and a higher battery life performance.

The adapter is powered by the HTC QC 3.0 PowerBank, which can also be used to charge a smartphone.

Network One Distribution (NOD), a wholly-owned company owned by Iulian Stanciu, is the leader of the Romanian electro-IT distribution market, with businesses in excess of EUR 271 million in 2018. Currently, the company carries out operations on the Romanian and Moldovan markets and has an active customer base of over 1,500 resellers..

VIVE is an innovative virtual reality platform, created and optimized for room-to-scale VRs and realistic interactions. Fulfilling the promise of virtual reality with technology that changes the highest quality standard and content, VIVE has created the strongest VR hardware and software ecosystem, bringing VRs to consumers, developers and businesses. The VIVE ecosystem has evolved around the best VR hardware on the market, supported by VIVE X, a USD 100 million accelerator for VR / related startups and related technologies, Viveport, a global platform and application store with the world’s first VR subscription model, operating in over 60 countries, and VIVE Studios, the initiative to develop and publish VR content.