IMWorld 2018: Guillame Guerrin, Mobile researcher at Ipsos, on digitalization and the people’s fear of AI 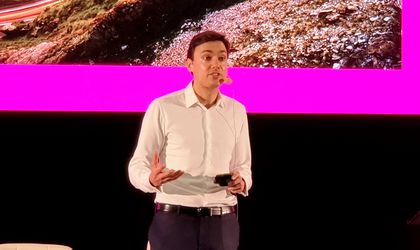 Romania’s digitalization level is not so great if we look at the European statistics for innovation, where our country falls down to the last place. But there is a difference between perception and reality, as a study conducted by Ipsos shows.

”The perception is that 85 percent of Romanians own a smartphone, but the reality is that only 60.6 percent have a device that can be considered smart,” said Guillame Guerrin, head of Mobile research for Europe, CIS and Africa at Ipsos.

It is a better number than the one in India, where the perception is that 64 percent of citizens own a smartphone, while the reality shows that only 8 percent do. But, says Guerrin, it should be noted that their respondents in Romania were a group of people who work in the industry, so the results should not be considered representative of the entire population.

”When you leave the house you take three things with you: your wallet, keys and smartphone,” says Guerrin, pointing out that the smartphone is the most important one of them.

The smartphone represents the digital revolution that we all see today. In 2017, the study showed that 66 percent of the people think that the Digital Revolution will have a positive impact on our lives. Today, the percentage of people believing that is 80 percent.

Asked about how advanced certain sectors are in adopting a digital infrastructure, Romanians answered that the most advanced is Social Security, with a percentage of 74 percent, while the second place is taken by the Civil Status Registry with 73 percent. The justice System and the Police take the third place with 70 percent.

The top 3 priority sectors that need to develop are Health, with 76 percent, followed by Taxes with 59 percent and Education with 58 percent. ”The Health sector is the top priority for most countries, while Taxes are not seen as important in other European countries,” says Guerrin. The same lower numbers are seen for Education, but the situation is different in developed European countries due to the fact that Education is more advanced.

The disruption of business

More than half (55 percent) of the companies who participated in the study believe that the digital revolution will disrupt the industry they are in, a number lower by 7 percentage points than the one in 2017.

The companies’ optimism can be seen in the answers about how close their organization is to becoming an ”ideal digital organization”, where 44 percent said they are ”close”, while 40 percent said that are neither close nor far and 17 percent answered ”not close”.

As for the software needed to move digitalization forward, 27 percent of companies say that they would buy what they need, while 29 percent would develop the software in-house.

Nevertheless, the digital revolution cannot be stopped. It is already impacting our lives and the impact will only grow higher in the future.

”Digitalization is met every day, everywhere, at home, at work, on the street, at the shops… even in your sleep.”

CBRE: reasons why companies should start the review process now