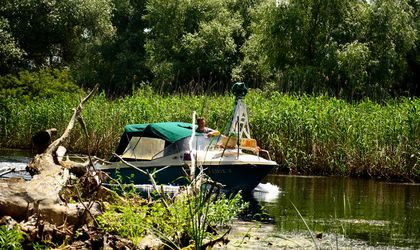 Google made a partnership with World Wide Fund in order to be able to put the Danube Delta on the world digital map. The Street View capture process began a month ago, with the WWF team navigating the Sulina and Sfantu Gheorghe channels, and the images will be available online in autumn on Google Maps after being processed by Google specialists.

The Danube Delta, an internationally protected UNESCO site, houses over 5,000 species of animals and plants, over 300 species of birds, making of 85 percent of the species of birds in Romania, the largest pelican colony and the most wide compact reed area in Europe. Delta is also known for underwater ‘dinosaurs’, respectively sturgeons, the world’s largest freshwater fish.

During communism, however, the biodiversity of the area has fallen due to the expansion of farmland, farms and excessive reed rearing.

A hashtag meant to change the trend: #ProtectWater

The biggest threat to biodiversity comes from the combined impact of the loss and degradation of habitat due to human activity – this is why the current period is called Anthropocene by the researchers.

If the current trend continues, by 2020 wildlife populations could reach a 67 percent decline compared to 1970 as a result of human activities. In addition, the populations of freshwater species suffer the most, the decline being in this case 81 percent, more than double the land and marine species.

With biodiversity of freshwater ecosystems, actually lost and essential environmental services: flood protection, water, wood, biomass, opportunities for tourism and recreation, fish and other food sources. But we can also protect nature through simple gestures.

It means choosing local and seasonal products, supporting sustainable products developed by locals. When we travel, be responsible tourists who take pictures with them only as memories and do not disturb the wild species.

Perhaps the most important thing is to let us know and act when we see that laws passing through nature, such as the Water Framework Directive and the Habitats Directive, are in danger. Only together and through repeated gestures day by day we can protect nature.

Mapping the Delta and giving the possibility to view the water channels to over 1 billion daily users is a way to raise awareness on the problems the region faces. Also is a way to see one of the world’s most beautiful places.