Glovo deliveries in Bucharest at 30,000 since launch 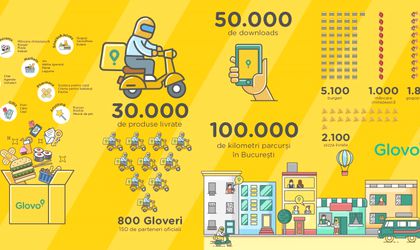 Glovo, the application that allows users to order and send anything, has recorded 30,000 product delieveries in Bucharest since the launch of local operations. The application was downloaded by more than 50,000 users and over 800 vendors provided delivery services. Glovo was launched in Bucharest this May.

With Anything / Everything service, Glovo can deliver anything from a backpack from a specialized shop to a dress that the user has seen in a shop, and with Courier / Courier service, it is allowed to deliver documents or pick up items forgotten at home or at the office, such as keys, glasses, or notebooks. In the three months since it first started in Bucharest, the 800 glovers on scooters or in cars covered over 100,000 km in the capital and delivered 3,700 kebapas, 5,100 burgers, 2,100 pizzas, 1,000 eclairs and 800 donuts. The average order per user is RON 50.

Glovo plans aim to extend services through partnerships with vendors offering products dedicated to pregnant women and mothers to provide quick and integrated access to them. The first three months show an increase in orders for diapers, milk powder, baby food and creams.

“We want to meet delivery needs for pregnant women in the capital, with the number of births being estimated annually at around 20,000. Statistics show that families are very active in the application, not just by orders for nappies or baby food, toys or clothes, but also for organic food, kitchen items, or supermarket shopping for all members. The Anything section offers special comfort in the delivery service, and we aim to facilitate users’ access to any product they need and deliver them in a timely manner, “said Victor Răcariu, General Manager of Glovo Romania.

By the end of September, Glovo users benefit from free delivery to products ordered from the categories Restaurants and Snacks & Juices.

Currently, the service is available only in Bucharest, but Glovo’s plans aim at expanding into cities with over 200,000 inhabitants. The platform is a market in which three types of users are operating: users who want to order their food or any other product or deliver certain items, restaurants and partners that get closer to customers and suppliers.

Glovo has over 1 million users and 5,600 partners at international level. The start-up is currently active in over 61 cities in 17 countries around the world and is pursuing expansion in new cities in the next period.