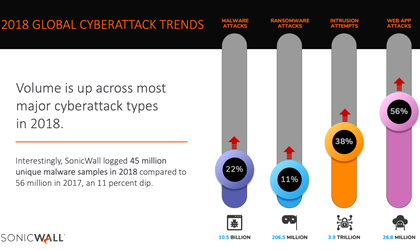 Analysis of the data collected through SonicWall Capture Labs throughout the year 2018 shows an increase in the volume of cyber attacks and new cyber threat tactics used by criminals. In 2018, according to the report, were identified over 10 billion attacks of various types, the highest number ever recorded by SonicWall.

“Attackers are constantly searching for new ways to get valuable information,” says Bill Conner, president and CEO of SonicWall. “We have the duty to constantly counter all these attempts by cybercriminals. By sharing precious information about computer threats with our partners and customers, we give them an important tactical advantage. But it’s also important to offer intelligent weapons to fight in this battle for all those in the first line,” explains Conner.

As the sophistication of computer network defense methods increases, so is the case with attacks. In order to better hide the harmful elements they are trying to implement, attackers now also use ports that are not commonly used to access the Internet, such as ports 80 and 443. Based on a sample of over 700 million malicious attacks, the SonicWall study showed that 19.2 percent of malware attacks in 2018 used such ports, an increase of 8.7 percent compared to 2017.

PDF files and Office suites, tools that most employees in companies of any size and industry work with every day, have also become channels for cyber attacks. Cybercriminals now use these file formats, which most users trust, to circumvent the traditional firewall and single-engine sandbox systems to send malware.

SonicWall’s multi-engine sandbox service has detected information threats streaming over 47,000 PDF files and nearly 51,000 Office files in 2018. This is a growing problem because most security solutions cannot identify and diminish hidden malware in files.

SonicWall’s annual report is the result of SonicWall Capture Labs data collected from over 200,000 events and daily attacks involving various types of malware.

The Different Types of Viruses