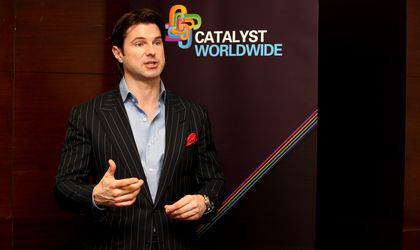 Catalyst Worldwide, a developer of digital technologies that is part of Catalyst Group, has launched officially in Romania, with plans to employ 250 people by the end of 2014. At the moment, the team in Romania numbers 33 people, but by the end of 2013, the staff is projected to reach up to 100 employees based in Bucharest.

“The first 50 people you bring into the company will define your culture for a number of years,” said Michael Koch, CEO of Catalyst Group, who also specified that the corporate headquarters of the company will be based in the Romanian capital. “There is no need to go outside Bucharest,” he added.

Koch: Some global CEOs are raving about the work done in Romania

Romania was chosen over a number of other countries because the local teams have certain attributes that are hard to find elsewhere, said Koch. “The attention to detail here in Romania is unrivalled globally. Here people think through things,” said Koch. “Some global CEOs are raving about the work done in Romania. The best technological development that I have seen was right here.”
Catalyst Worldwide was founded in 2012 as part of the Catalyst Group. Koch said he intends to turn Romania into the most important digital development hub in Europe, with the ultimate goal an Eastern European Silicon Valley. Koch said he will stay in Bucharest for at least two weeks every month to help make that happen. He added that Romania is on the brink of a great shift five to ten years down the road.
The plan to turn Romania into an Eastern European Silicon Valley will have three elements. One aspect will be creating an international production center accompanied by a digital solutions incubator called Global Digital Think Tank. Secondly, Koch will found in Bucharest the Digital University, which will bring the most innovative IT entrepreneurs together in a digital eco-system. Third is the creation of the Digital Catalyst Fund, an investment fund to support entrepreneurial ideas from all over the world. Koch is a review board member in the Digital Catalyst Fund, with other board members including businessman Cristian Burci, former gymnast Nadia Comaneci, entrepreneur Emi Gal of Brainient, Matt Spiegel, CEO of Tap Me, Simon Bond, CMO of BBDO & Proximity Worldwide, and Lance Neuhauser, founder and CEO of The Echo System.
Koch, a serial entrepreneur who has started companies that deliver tailor-made solutions to global companies such as P&G, Fed Ex, Visa, Pepsi Co, Mars, Campbell’s, Nike, AT&T and Microsoft, is also founder and CEO of Provision. Between 2000 and 2012, he launched and sold three privately held digital production companies, most notably Kinergy Worldwide.
Otilia Haraga