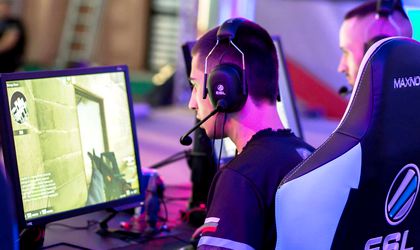 Bucharest Gaming Week, the event dedicated to the gaming industry and video game enthusiasts in Romania, returns with a new edition from December 4-9, 2018. After the first event gathered over 10,000 participants, from Romanian gaming enthusiasts and developers to international game development specialists, the new edition will present to the public the new games created in Romania, new opportunities in the industry and the finest e-sport competitions.

The central event will take place at Romexpo on the weekend of the 8th and 9th of December and will bring together passionate players and the most popular streaming stars and gaming vloggers in Romania, giving them the opportunity to discover projects by game development studios in Romania and participate in various competitions organized by the partners.

“The Romanian game development industry generated in 2017 a turnover of USD 156 million, 11.6 percent more than in 2016, which is clear proof that this creative industry has a steady and sustained growth. Bucharest Gaming Week focuses on the ambitious projects developing in Bucharest, convinced that the industry can grow much more than that. The previous edition has shown us that there is real potential to put the Romanian capital on the world gaming map,” said Tudor Daescu, President of Gaming Week.

“Video games have become more than a passion, and many of those who love gaming are making a career either in the game development industry or as professional players. Bucharest Gaming Week proposes a series of educational activities for the development of a video game, as well as competitions dedicated to the e-sports phenomenon. Additionally, amateur tournaments, contests, hands-on sessions with the latest video games and gadgets from our partners will take place at the event,” said Marius Radu, partner of Gaming Week.

ESL (Electronic Sports League) brings to Bucharest Gaming Week the first Counter-Strike: Global Offensive Invitational. During the week dedicated to the Romanian gaming industry, the Bucharest Gaming Week Invitational event by ESL will offer prizes worth a total of EUR 50,000. The competition will take place at Romexpo’s pavilion B2, on the weekend of December 8th – 9th, from 10 am to 8 pm.

Four teams will compete in the Bucharest finals: 2 professional teams who will participate on an invitation basis, the third will be the winner of the ESL Southeast European Championship tournament, and the fourth will be the winning team from the Online Play-off. Within the Online Play-Off, there will be 2 sessions on November 10 and 17, open to all participants in Europe.

Players in the final stage of the competition will be credited for a total amount of EUR 50,000. The awards will be divided as follows:

Tickets for the Bucharest Gaming Week are up for sale and can be purchased from www.arcub.ro, www.bilet.ro, www.entertix.ro and www.myticket.ro as well as from their partner stores or from the ARCUB tickets from Lipscani Street, no. 84-90.

Tickets for one-day access are available for RON 25, and subscriptions valid for both days can be purchased at the price of RON 40 until 15 November. Starting November 16, the price for single-day tickets will be RON 35 and the subscription will be RON 55.