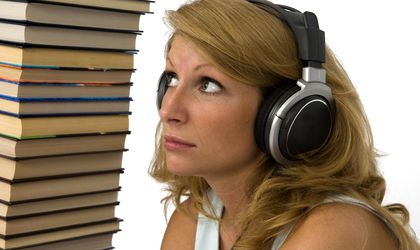 The voice of a talking book can be as important as the story it tells, which is why the journey of an audiobook from the studio to the book shop shelf differs significantly from regular book production. This makes audiobooks a very specific niche market, which only represents 1 percent of total book sales in Romania. And even with the promise of growth, it will remain distinct from the mass market.

”Yes! The voice is essential and decisive in the success of the product. It is in fact the genuine carrier of the literary text,” says Maria Elena Negoescu, editor of Casa Radio publishing house.

If the voice is that of a public figure, there are certain advantages. Not only it will spark the interest of the listener, but the recording process will be much easier, as the narrator is already used to public speaking.

A ‘special effect,’ which is impossible to obtain during the translation of a book in the traditional format, can be achieved when authors read their own books. “Imagine how much of the charm of Eckhart Tolle’s readings would be lost if a double had been used instead,” Iren Arsene, managing partner of Curtea Veche publishing house, tells BR. It is very important that the right reader is chosen. “Most of the time, the tone matters less and the personality behind the voice matters more,” Mihaela Coman, GM of Humanitas Multimedia, tells BR.

But this is only the tip of the iceberg: other important ingredients that go into the success of a talking book are the topic, the content and the editing.  In theory, any title can be turned into an audiobook.

The number one deciding factor is the demand, which is for now surpassed by the availability. It is important that the text has a story.

The size of a text also matters, which is why it is short stories that are usually made into audiobooks. A total of 10,000 words will fit onto a CD, and listening to it will take about an hour.

Up to a point, an audiobook will follow the same circuit as any other editorial product.

Production costs are split between the author’s royalties and the expenses of the translation, production and promotion. To this must also be added the cost of the reading and studio processing.

The production costs of an audiobook differ depending on the number of copies and how many CDs it contains, but on average, it works out at around EUR 2-3 per copy, according to Arsene.

Shelf prices vary between RON 30 and RON 199, depending on how many CDs go into the audiobook, says Coman.

Publishing houses that attempt to transform a normal book into an audiobook will have to take into account the degree of compatibility of the title’s subject with the target ‘reader’ and his or her interests.

This in turn will decide the types of titles that become audiobooks.

As a rule, the ‘usual suspects’ will predictably be men, about 35 years of age, with medium-to-high incomes, who listen to talking books in the car or while working out. The audiobooks that match the tastes of this kind of listener will most likely include financial information, the learning of foreign languages or simply relaxation.

Children of various ages, whether they have not yet learned to read or have just passed the age when their parents read them bedtime stories, are another key target market.

“The target audience of the audiobook falls into very wide and flexible categories: from very young children to the elderly, from blind people to drivers, from teachers to fans of the famous voices of theater and literature,” says Negoescu.  Be that as it may, audiobooks seem to have lost the race for popularity to e-books, which are currently spearheading the transition to a different kind of reader, the digital bookworm.

Audiobooks make up less than 1 percent of the total book market, because this is essentially a niche.

“There is potential for growth because Romanians are responsive to new platforms such as audiobooks and e-books, but the level will not be significant,” says Madalina Galan, head of concept management for books at Diverta.

Germany and France are roughly on a par with Romania, whereas in England, audiobook sales hold a 5 percent slice of the market, and in the United States it can be as high as 10 percent. Book stores will acquire audiobooks from local suppliers rather than throw foreign titles onto the market.

To test the water, retailer Diverta brought in a few imported titles such as the Da Vinci Code and Sherlock Holmes series, but they did not enjoy positive results.  Audiobooks generate approximately 1 percent of the turnover posted by the company on the book segment. Approximately 160 titles were sold last year.

At the moment, the market of audiobook producers is split between Humanitas Multimedia, which has the highest share, Curtea Veche publishing house and three suppliers of titles for children and personal development  Annually, Humanitas Multimedia sells about 100 titles in Romania, and releases on average 40 new ones. “We are tapping now into unexplored territory: music in theory and interpretation. We have Grigore Lese (ed. note: Romanian folk singer) in the studio who plays the hora, while at the same time explaining the songs and traditions drawn upon,” says Coman.

Curtea Veche started to publish audiobooks in 2007, being one of the first to release such a product in full format. The production costs of audiobooks released by Curtea Veche are footed by the house’s agency Griffon and Swans, and are negotiated depending on the number of copies.

So far, Curtea Veche has published six audiobooks, all of which are in Romanian. The titles in its portfolio cover categories such as financial education, self-help guides and fairytales.

Casa Radio publishing house, meanwhile, produces on average 30 titles a year, all in Romanian, and only draws on the archives of the Public Radio institution, created over eight decades of activity under the consecrated name of the Golden Audio-Collection. This includes the voices of iconic Romanian poets and writers such as Tudor Arghezi, Lucian Blaga, George Bacovia, Mihail Sadoveanu and Nichita Stanescu, and actors from all eras.

“This apparent limitation to the editorial products we put onto the market is in fact an important competitive advantage which makes our offer stand out, a plus that we will continue to value,” says Negoescu.