3D trains its sights on Romania 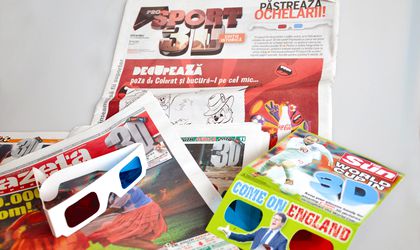 Gadgety whim or turnaround technology that will alter the way we see images in the future? The launch of 3D technology has not failed to make an impact in Romania, in various fields. To name just a few, 3D has penetrated television, cinema, the music industry and the media. Some pundits in Romania see it as a turning point, others merely as a new technology which does not herald revolution.

The main difference between 2D and 3D images is that a 3D image brings depth and realism to any moving subject, giving the viewer a sense of participating in the action. Meanwhile, the conventional image displays objects in two dimensions, making it impossible to express the natural depth and presence the characters/objects have in the real world.

“Romanians are pretty open to technological innovations, therefore we are quite sure that the 3D revolution is one technology they will adopt fairly early,” he says.

Of course, a certain level of income is required to keep up with the Joneses and afford the latest trends. Information that Sony gave Business Review indicates that a 3D-ready device will set the viewer back approximately EUR 2,000 (a pair of 3D glasses and 3D receiver included). All this for a better image experience.

“The Sony 3D TV buyer is an early-adopter, he/she can already predict that this is the present and the future even now. The buyer is a middle/high income consumer, rather young enthusiast, passionate about gadgets, interested in the latest technology, but also in the quality of the product,” says Ishikawa.

Sports newspapers do battle on the 3D front

The pioneer of 3D print on the written press market in Europe was a Belgian newspaper La Derniere Heure, the first ever in Europe to release a 3D edition. It was followed by the British tabloid The Sun which also went 3D at the beginning of June. Just a couple of months after these European launches, two of the leading sports newspapers in Romania released 3D editions. Competitors Gazeta Sporturilor and ProSport published their first 3D editions on the same day, at the beginning of this month.

“The moment when 3D newspapers appeared abroad, it was clear to us that ProSport needed to offer its readers at least one such edition,” Cosmina Noaghea, publishing director of PubliMedia International, tells Business Review. So far, there have been two ProSport 3D editions – on July 1 and 12. If advertisers continue to be interested in these projects, the publication is willing to release more.

All the investment required was in the special glasses that reached the paper’s readership in the same package as the newspaper. But then, this paid off since there were higher revenues from advertising, says Noaghea.

“Of course, more effort was required from everyone involved in this project – the editorial, marketing, production and distribution departments,” she adds.

For instance, much greater effort for processing the images is needed for a 3D edition. The lay-out department started working a few days earlier in order to process the pictures. All the images were processed and the 2D images modified using a depth map in order to emphasize the various fronts. Thus, most pictures had three fronts – the main front, the secondary front and the background. More attention was also given when the paper went to print.

The 3D format was seen as an opportunity “to bring one more argument in favor of the value of the written press. It does not represent the future of the written media,” says the director.

But it appears that for a while at least, until 3D mania dies down – if it does – these newspapers have found the successful recipe to keep print relevant.

“We do not yet have the figures from the distributors. From the surveys we have carried out at kiosks, there should be zero returns, but we will see when we get the figures,” says Noaghea.

Meanwhile, the print press in Romania is plagued by the financial crisis, which has triggered lay-offs, lower sales and circulation figures and a cut-back on advertising, all in the context of a general migration from print to online.

Romanian dance music outfit Morandi released the first 3D video filmed in Romania called Rock the World, the second single off their Zebra album, to be launched in fall by the record label Universal Music Romania.

“While in the film industry 3D technology has been used for some time, it is still undergoing tests in music (…) There is indeed a trend to introduce many 3D elements in videos and I think in the future this will become a must,” Ana Diaconu, marketing manager at Universal Music Romania, tells Business Review.

Morandi are part of a league of Romanian artists who have used 3D elements in their videos – such as Ana Maria Ferentz, Alb si Negru, Paula Seling and Ovi – however, they are the only band who have shot stereoscopically, which is very rarely done in the music video industry. “Romania is evolving fast and is receptive to anything new, so 3D technology is definitely the next step in the music evolution in Romania,” says Diaconu.

What is the appeal of such a video? Well, a 3D video offers “a feeling of immersion, it takes you to the world of parties and joy created by the video. It is like you are having fun with the artist,” says Diaconu.

In order to shoot a video in 3D, two cameras are used in parallel. The same image has to be followed with the same focus at the same time. Post-production lasts longer than for a 2D video and requires more image and color effects. Equally, the costs of a 3D video are three times higher than the production of a 2D video.

Morandi’s 3D video will be launched on the YouTube 3D site. The plan is also to screen the video in several 3D movie theaters in the country. It can be downloaded

and watched on fans’ personal computers with the help of the

glasses that can be found on the website www.getmusic.ro/rocktheworld.

“I honestly think that in the near future music videos will all be shot in 3D, and, why not, 6D,” concludes Diaconu.

Avatar, Alice in Wonderland, Clash of the Titans, Shrek Forever After, Toy Story 3 – so far, these five films in this particular order, which were screened in 3D, have captured the imagination of viewers but also taken a great deal at the box office. Of course, this ranking may change when some popular summer films have run on the big screen long enough.

“When a film is screened in 3D and 2D, of course the 3D version will be preferred. However, leaving this aside, what matters is the quality of the film and of the actors’ performances (…) The 3D format is not appropriate for all types of films, only for a certain director’s vision, which is why both the 2D and 3D formats will continue to co-exist and enjoy viewers’ appreciation,” Corina Gonteanu, marketing& PR manager at Cinema City Romania, tells BR.

Cinema City has 72 rooms in seven multiplexes. In the next two months, a new Cinema City will be opened in the Atrium mall in Arad, which will have 10 movie theatres. By the end of the year, the chain plans to open cinemas in Braila, Baia Mare and Targu Mures.

Gonteanu explains that in a multiplex there are several 3D movie theatres, and the main investment is the purchase of the 3D projector. Such a piece of equipment can cost between EUR 100,000 and EUR 120,000, which is three-four times more expensive than a 35 mm projector. When the return on investment comes depends on the number of 3D films that are released and how popular they are.

The most attractive will be 3D films, irrespective of the genre.

Traditionally, Romanians have preferred comedies and action flicks, but their appetite for one or the other depends on the quality and number of such films thrown out on the market in a certain year.