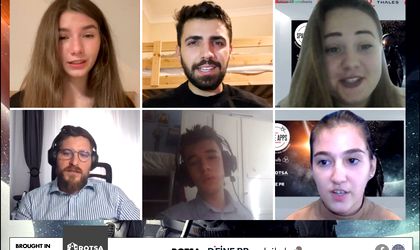 Over 200 people from Romania participated in the annual edition of the NASA SpaceApps Challenge hackathon that took place, online, simultaneously in 162 countries and territories around the world, on the weekend of October 2nd -3rd. Among the winning projects are a greenhouse to provide nutritional supplements for a mission to Mars, space exploration games, and a virtual map showing the debris orbiting the Earth.

The 200 participants are aged between 16 and 56 years old and more than 80% had a technical background. 28 teams registered in the competition. Although the event took place online in the 4 cities, the creativity marathon brought together participants from Arad, Maramures, Sibiu, Constanța, Timișoara, Bucharest, Galați, Cluj, Iași, Harghita, Prahova, Dolj, Suceava, Argeș, even Bulgaria – Sofia and the Republic of Moldova – Chisinau.

15 teams presented their projects in the final. 6 Romanian teams qualified for the international judging stage of the competition:

A special award was given to the A.M.C.G. team, from Bucharest, for their idea with potential in space – creating a website that helps NASA share information with researchers.

“The teams impressed me with the ingenuity they employed to create innovative, efficient and engaging products. The participants showed significant execution and delivery skills, worked passionately and constantly asked for feedback for their ideas. All this gives me confidence in the future because we are obviously dealing with true talents and gifted minds, with a great understanding of the present reality and who know how to think about the future “, said Borislav Bliznatchki, Mentor, Endava.

“Innovation, collaboration, technology, creativity and diversity are the words we could use to describe the projects that participated in this year’s NASA Space Apps Challenge. It is motivating and encouraging to see so many minds working together with so much passion, and their solutions to the planet’s problems have captivated us and confirm once again that it is essential to support such projects. We are constantly investing in the young generation that creates today’s technology, especially now that Vodafone is going through a process of transformation, and we are evolving from a telecommunications company to a technology company ”, says Fabiola Cazan, Senior IT Manager, Vodafone Romania.

The solutions developed by the Romanian winning teams will be included in the international evaluation, coordinated by NASA. The winners of Space Apps will be announced in January 2022 and will be invited to present their projects to NASA (and to the space agency partners, if applicable). International winners will also be invited to visit a NASA station, together with the global organization team, the Space Apps Challenge, and witness the launch of a shuttle.

NASA SpaceApps Challenge is an innovative incubation program, held annually in hubs around the world, since 2012. In 2020 Space Apps had approximately 26,000 participants, who created 2,303 projects, internationally. The full list of the 2020 hackathon finalists can be accessed here. Last year, four Romanian teams qualified for the international judging stage of the competition.

Next year’s edition, NASA SpaceApps Challenge 2022, will take place between 1 and 2 October 2022.