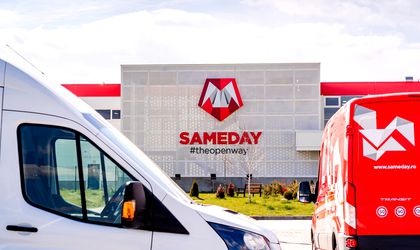 Sameday, one of the largest players on the local courier market, announces that it is moving towards an increasingly sustainable delivery and that it aims to reach the 0 threshold of carbon emissions for deliveries to easybox lockers. Its network of energy autonomous easyboxes has reached 10 units after the company invested in expanding nationwide.

Launched two months ago, in Bucharest, green easyboxes are now present in Cluj, Timis, Constanta, Brasov and Sibiu counties. The rising adoption rate of the out-of-home delivery (OOH) service, as well as the new sustainable lockers are leading to a reduction in the courier company’s carbon footprint. Thus, Sameday, together with its B2B and B2C customers, who choose the easybox delivery service, contributes to a better, less polluted environment.

The innovation behind a more sustainable delivery

Launched in 2018, the easybox service is the technological delivery solution, which generates a low impact on the environment by streamlining shipments. Consolidating more than 50 parcels in a delivery machine requires a small number of trips from both the courier and the user. According to the company’s studies, the positioning of easyboxes in the proximity of residential centers, office spaces and the most popular supermarket chains reduces by up to 50% the CO2 emissions associated with the delivery and collection of packages, as well as the traffic in cities.

Easyboxes with minimal impact on the environment are equipped with photovoltaic solar panels and do not require connection to the main electrical network. They work without conventional electricity, and the internal battery that stores solar energy allows the lockers to be used even on cloudy days, providing the energy needed for automatic connection to the Sameday network. Like the entire easybox network, standalone lockers are an expression of innovation and digitalization in courier services. They are interconnected, monitored and managed remotely through an adapted technological solution. Thus, Sameday has constant access to information on the status of pick-ups, returns and release of cassettes, which allows for more efficient loading trips and reduced CO2 emissions.

“At Sameday, we know that the contribution of each of us is important and that, by taking small steps, we can play our part in creating a better, sustainable environment. That is why green innitiatives play an important role in our medium and long-term strategies. It is our way of meeting the needs of today’s and future customers. Next year, we want to increase the number of easyboxes with 0 electricity consumption and we are still looking for new partners and installation places.”, says Lucian Baltaru, CEO of Sameday.

Plans for a green future

As a long-term strategy, Sameday aims to make the OOH delivery service a zero-carbon project by transforming all easyboxes into energy-independent lockers, complemented by electric car delivery. Thus, the company’s efforts are focused both on protecting the environment and on innovating and expanding customer service.

In 2022, Sameday’s goal is for over 10% of the lockers installed in Romania, during the year, to be 100% green, and this percentage will increase gradually, annually.

Sameday continues to expand the easybox service, known for its environmentally friendly attributes

The easybox service is known for its environmentally friendly attributes. Lockers do not produce paper, generate a smaller number of motorized trips and a 50% reduction in carbon footprint compared to door-to-door deliveries. Moreover, fixed point deliveries in Sameday vending machines have a positive impact on traffic and eliminate the problems associated with unavailability of parking spaces in congested urban areas.

These, as well as the comfort and convenience offered to end users, have made the rate of adoption of the service increase rapidly and reach over 53% in Bucharest and over 32% in the country. Currently, there are over 2,700 units in Romania and Hungary, but Sameday representatives estimate that by the end of the year, their number will increase to 4,500.

Although, initially, the big cities were the first to embrace the concept of easybox, today the demand is growing considerably in the small urban areas. The top of the counties where easyboxes are located is led by Bucharest, followed by Cluj, Ilfov, Timiș, Iași, Constanța, Brașov, Dolj, Prahova and Sibiu. Approximately 20% of the 2,700 units currently existing are located in cities such as Bascov, Nădlac, Cugir, Beiuș, Sânpetru, Murfatlar, etc.