Cristian Gheorghe, Prysmian: The future of the networks relies on convergence 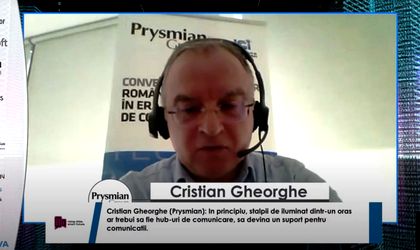 The future of networks relies on convergence. Our day by day life depends on the power infrastructure, that is present in every household and it can carry a lot more than just energy through its cables, it can become smart and support also the communications, as Cristian Gheorghe, Sales Director Telecom Solutions at Prysmian Group said at Business Review event Rising Cities. Smart Future 2020.

”Two years ago, together with ICI (National Institute for Research and Development in Informatics), we held a conference called Network Convergence. At the time, the main opportunity was given by the need for energy suppliers to change the obsolete networks or install smart-meters and the authorities strategy to have universal connectivity for every citizen. So we began a discussion in which we proposed to use power and communications networks through a single cable”, said Cristian Gheorghe.

”After debates we create a working group, and I was asked to come up with some case studies that I will present here for the first time.”

”An ITU report from 2017 checked how it is perceived in the EU countries the collaboration between the two industries, energy and communication. While energy has the advantage of being everywhere, the communications is part of all future strategies. The study highlighted two countries that can improve the current situation, Romania and Albania. On one hand, the legislation had to be supplemented and on the other hand, the creation of regulatory agencies to oversee implementation was needed”, said Gheorghe.

„One of the first projects where we proposed hybrid cables was for a smart lighting project  where energy and communications networks are normally analyzed as separate  projects. Using a hybrid cable network  lighting poles may become communication hubs with fiber optics reaching each pole. We proposed to Slatina’s Municipality to install for one of their projects a hybrid cable that include energy and 2 fiber optics per pole that support all the telecom services necessary for the area (cameras, routers, sensors, ie).The poles will become optical nodes for communications”, explains Prysmian representative.

”Another project we had in Slatina covering 2 blocks of appartments was to install hybrid cables from each power meter to the apartments replacing the existing old electrical networks. The electricians learned in less than an hour how to install the hybrid cable and now, each apartment has two optical fibers installed through the electrical wires . It is important to understand that as a block administrator I should know what the tenant wants and the power utility to know online what is the consumption and how we consume. There are  no complicated things needed to bring fiber into the house via power cord”, said Gheorghe.

“In many blocks of apartments all utilities are at the consumer’s door. Energy, water, gas, plus about three communications operators! Smart grids can be made to show how much the tenant consumes from each utility and how it can be adjusted according to his needs.”

”Another pilot project made in Slatina and which can be applied in any manufacturing facility is the smart plant. Today we have a separate telecom network to collect data daily from the machines, we have switches with ethernet cables that go to servers. The telecom cables are installed on a separate route from the power cables. What we propose is to combine these two networks. It would be much cheaper to make a convergent network and in addition to bring fiber optics to machines . This will allow an upgrade from simply reading sensors to a two-way communication with a very large bandwith”, said Gheorghe.

”A smart grid allows the people to control their carbon footprint on the environment. All data must be correlated and the network should allow the consumer to interact and optimize their impact. That is, communication is needed in both directions. We need smart infrastructure that reaches every citizen and it is also reliable and safe. We can do all of this with locally produced equipment and we can do it using 100% Romanian intelligence”, concludes Cristian Gheorghe.