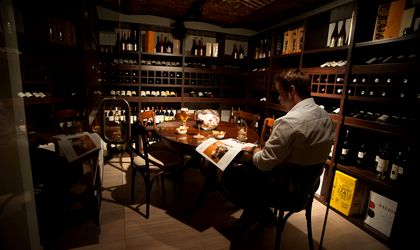 The opera was inspired by a Persian fairy tale, set in China, about a cruel princess and the prince who tries to win her heart. This production is designed by Giuseppe Adami and Renato Simoni, staged by Stefan Neagrau and conducted by Tiberiu Soare.

Based on the legends of Don Juan, a fictional libertine and seducer, “Don Giovanni” is the latest performance of the Bucharest National Opera, which has had the premiere on February 17. Under the wand of Vlad Conta, Mozart’s characters are represented by Don Giovanni – Eugen Secobeanu, Il Commendatore – Marius Boloș, Donna Anna – Edith Borsos, Don Ottavio – Andrei Lazăr, Donna Elvira – Antonela Bârnat, Leporello – Radu Ion.

Fenyo Laszlo, one of the greatest European contemporary cellists, will play together with the National Radio Orchestra the “Concert in B minor for cello and orchestra”,   celebrating the Czech composer Antonin Dvorak. The concert will be performed under the wand of German conductor Gerd Schaller, who conducted several musical ensembles in Germany. Part two of the concert features the “Symphony in D minor” by French late-romantic composer Cesar Franck.

The two acts ballet was inspired from a poem by Heinrich Heine. The ballet tells the story of a lovely peasant girl named Giselle who has a passion for dancing, and when she finds out the man she loves is engaged to someone else she dies of a broken heart.

Zandonai’s early 20th-century melodrama Francesca da Rimini returns to the Met for its first revival in more than 25 years, in Piero Faggioni’s opulent and realistic production. Marco Armiliato conducts Eva-Maria Westbroek in the title role of a noblewoman who is tricked into marrying the brutal Gianciotto, sung by Mark Delavan, instead of her true love Paolo, sung by Marcello Giordani. Robert Brubaker sings the wicked Malatestino, whose jealousy incites a murder.

The sixth edition of One World Romania, a film festival dedicated to human rights documentary will put on display themed movies. One of this year’s special events is Holocaust documentary Shoah, released in 1985, but never seen before in Romania.

This year, the main theme is “Hate Is Bad for Your Health” (Ura dauneaza grav sanatatii). According to the organizers, since the last edition of One World Romania, the amount of hate and intolerance per square meter has exponentially grown.

The rest is tomorrow

The fashion exhibition The Rest Is Tomorrow was initiated by ICR London, at the invitation of British Council and British Fashion Council to participate in the International Fashion Showcase section, part of the London Fashion Week manifestation.

Thus, Romania was on the short list for “Emerging Talent Award 2013″ with such countries as Argentina, Austria, Estonia, Netherlands, Portugal, Scandinavia (Denmark, Norway, and Sweden) and Switzerland. This prize was awarded by the British Council and the British Fashion Council. After long debates, in which Romania was considered for the 1st place, The Rest is Tomorrow exhibition was awarded the 2nd place and the full specialized media and jury attention. The jury was impressed by the Romanian concepts and designs. The prize award ceremony took place on February 17th at the prestigious Somerset House, the headquarters of London Fashion Week.

Bucharest’s Old Center has a spot for wine lovers who can select their drink from a few hundred labels: Corks. The bar offers a menu of over 300 specialties, and all these wines can be served by the glass, as well. The selection includes fresh or vintage wines.

For wine collectors the bar offers anniversary or medal-winning wines, star wines, wines from the New or the Old World.