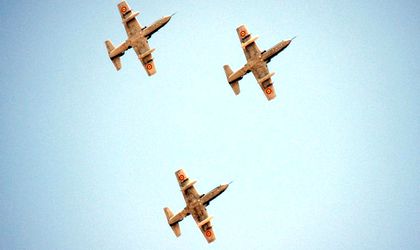 The biggest air show in Romania, Bucharest International Air Show & General Aviation Exhibition, will take place on Saturday, July 27 at Bucharest Baneasa – AurelVlaicuInternationalAirport, under the patronage of His Majesty King Mihai I of Romania.

Celebrating 90 years since the Romanian Air Club was set up, 100 performing and static display aircraft and public display, and over 100 elite pilots and sky divers will captivate the public. More details about the event, here.

Between July 26-28, the twenty-first edition of the Medieval Sighisoara Festival will present “Vlad, the Justice Knight”, meaning three days of celebration with Middle Ages theme.

This year, the central character of the festival is Vlad the Impaler, the ruler of Wallachia in 1448, 1456-1462 and 1476, a figure that is related also with the birth of Sighisoara Citadel. The artistic director of the 21st edition of the Medieval Sighisoara Festival, Liviu Pancu, underlined that the festival is not intended to serve as a historical reconstruction, but rather as a ‘floating” of the soul elements felt by Vlad, son of a father belonging to the Order of the Dragon, and who was trained in the Ottoman Empire, things that determined him, when at home, to wish justice and prosperity for his nation, according to Agerpres newswire. More details about this event, here.

The admission is free of charge. The entire program of the festival can be seen here, in Romanian language only.

The tour offers a guide throughout this beautiful expanse of Bucharest, which unfurls around CismigiuGardens, the “Central Park” of the city, which is also its oldest surviving landscaped garden. The quarter boasts a balanced mix of architectures ranging from Little Paris, Neo-Romanian to Art Deco and Modernism, and also representative church buildings, various species of neo-Gothic and triumphalist Mussolinian styles. Cismigiu is packed with the remarkable creations of some of the most famous native and foreign born architects, active on the local market starting with the last decades of the c19th; personalities such as Giulio Magni, Horia and Ion Creanga, Ion and Tiberiu Niga, Nicolae Cucu, Gheorghe Simotta, Petre Antonescu or Emil Günes, to cite just some of them.

The tour offers a guide through the late phase of the Neo-Romanian architectural style, which unfurled mainly in the fourth and the fifth decades of the c20th, a period when this order peculiar to Romania reached a crisis in terms of expression, mitigated by a fascinating synthesis with the Art Deco, Mediterranean and Modernist styles.

Starting on May 1, the AntipaMuseum will host the “Live tropical butterflies”, a temporary exhibition organized in collaboration with the “House of Butterflies” and the Vulticulus Geography Society. Visitors will have the possibility of seeing over 30 species of exotic butterflies flying freely in the special greenhouse set up within the “Antipa” Museum’s garden, but they can also witness the “birth” of butterflies. The exhibition can be visited from May 1 to July 31. Tickets cost RON 10 per child/student and RON 12 per adult/pensioner.