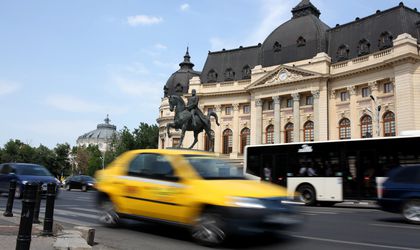 A three-day pass at this year’s B’estfest edition is currently on sale for RON 200, a one-day ticket cost RON 100, while a camping voucher can be purchased for RON 40. Tickets can be bought online here.

After last week’s classical music journey in the George Enescu Square, now the international jazz elite will conquer the same spot. Specially designed as a meeting place for music and art lovers, the generous space near the Romanian Athenaeum turns into an unusual “musical garden”, thanks to ArCub.

Until July 7, if you want to chill out the hot days of summer, come to see ArCuB Live Open Air-Jazz, Blues & More. The lineup consists of international jazz starts James Carter and Tomasz Stańko, as well as bands from Romania, Germany, UK, Holland and US. More details here.

The admission is free of charge. The entire program of the festival can be seen here, in Romanian language only.

Art in Bucharest – no. 15 – My Friday afternoon with artists

This Friday, ‘Art in Bucharest’ will take you to a journey through four artists’ studios, connecting you to the passion and the joy of creation. During four hours and a half, there will be a tour through those artists who work with materials varying from glass, to pencils, and food. Lucian Butucariu (stained glass artist),  Vasile Muresan Murivale (painter), Marius Tudosiei (food artist) and Ioan Atanasiu Delamare (grafic designer, painter) are those visited.

The tour offers a guide through a quite special section of Bucharest, in the past housing a part of city’s elite, composed mainly from medium and high ranking government workers from the inter-war Ministry of Agriculture and State Domains, hence the name “Domains” (Domenii in Romanian) for this quarter. The area has been developed between the early 1920s and the late 1940s. The beauty of the architecture found in this corner of Bucharest, a large part of it developed during the years of the fascist dictatorship, war time and the dawn of the Stalinist regime, is a testimony to the resilience of the human spirit in the course of those adverse upheavals.

The tour offers a guide through one of the most picturesque areas of historic Bucharest, that has known a spectacular development after the unification of the Principalities of Wallachia and Moldavia in the aftermath of the Crimean War. It is located on the road stemming from the old city toward Moldavia, known in the olden times as “The Highway” (“Drumul Mare”). Its name comes from that of the famous Mosilor fair, held outside Bucharest’s walls, where traders and peasants from Moldavia and north-eastern Wallachia came with their goods and products.

Starting on May 1, the AntipaMuseum will host the “Live tropical butterflies”, a temporary exhibition organized in collaboration with the “House of Butterflies” and the Vulticulus Geography Society. Visitors will have the possibility of seeing over 30 species of exotic butterflies flying freely in the special greenhouse set up within the “Antipa” Museum’s garden, but they can also witness the “birth” of butterflies. The exhibition can be visited from May 1 to July 31. Tickets cost RON 10 per child/student and RON 12 per adult/pensioner.