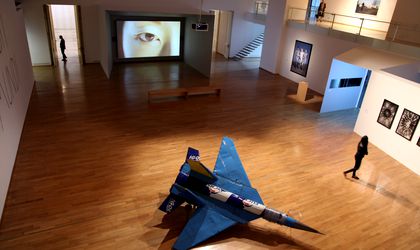 Romanian audiences will get the chance to see again the incendiary show offered by the New York’s group Voca People in Bucharest, between May 15-19, when they will deliver seven consecutive representations.

The Voca People is a new international vocal theater performance group that combines amazing vocal sounds and acapella singing with the art of modern beat-box which imitates the sounds of drums, trumpets, guitars and other instruments and musical effects without using any musical instrument on stage, performed in a humoristic way and with audience participation. More details here.

The Night of the Museums

During the night of May 18, museums of Bucharest will await visitors with the regular and special exhibitions, concerts, dance, theater, movies and interactive events for the ninth edition of the Night of Museums.

Details about the Night of the Museums here.

More than 1,200 people have attended the opening of the first local solo exhibition of one of the most important young artists to emerge on the international scene over the last decade: Mircea Cantor, winner of the Prix Marcel Duchamp Award 2011. The QED exhibition, the largest survey of the artist’s works to date, comprises 30 pieces. More details here. Details about this exhibition here.

One of the most realistic exhibitions in the world, The Human Body, will stop for the first time in Bucharest, at Antipa Museum, from March 22 to June 30. The exhibition includes more than 200 pieces – human bodies which through dissection of organs and tissue offer a three dimensional perspective of the miracle of the human body.Details about this exhibition here.

Local culture enthusiasts are now able to enjoy a traveling exhibition of China’s Terracotta Warriors: thousands of life-size terracotta figures from an army prepared for battle. Found by coincidence in 1974, they are now considered one of the greatest archeological discoveries of modern times. The exhibition features 101 rare objects – including the Terracotta Warriors – from one of the largest burial sites ever built, the Terracotta Army of the first Emperor of China, Qin Shi Huang. Four is the maximum number of these figures permitted outside China in a single exhibition. Details about this exhibition, here.

For five years now, culture fans have been making an annual pilgrimage to one of the most beautiful landmarks around Bucharest, Mogosoaia Palace, for a top-quality classical music festival that attracts artists from all over the world. This year’s event runs from April 20 to May 26. More about this festival, here.