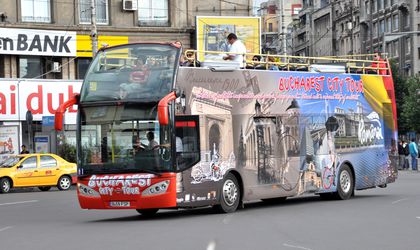 April 19, 19.00
Under the wand of Jin Wang, the Radio National Orchestra will perform Wolfgand Amadeus Mozart, Ludwig van Beethoven and Richard Strauss, with the extraordinary participation of the Romanian pianist Horia Mihail, who recently ended up his nationwide tour, The Travelling Piano.
Mogosoaia Classical Fest
April 20-21, 17.00
Mogosoaia Palace
For five years now, culture fans have been making an annual pilgrimage to one of the most beautiful landmarks around Bucharest, Mogosoaia Palace, for a top-quality classical music festival that attracts artists from all over the world. This year’s event runs from April 20 to May 26.
The opening event, at 17.00 on April 20, commemorates 200 years since the birth of Giuseppe Verdi. Soprano Sorina Munteanu, tenor Hector Lopez and sopranos Veronica Anusca and Alice Lopez will play arias and duets from operas including Rigoletto, La forza del destino, Luisa Miller, Il Corsaro and Un ballo in maschera.
April 21 – Concert by the winners of the third edition of The Road to Celebrity (Eufonia Quartet, soprano Rodica Vica, cellist Mircea Marian, pianist Maria Diana Petrache).

Rigoletto
Bucharest National Opera
April 19.00
The Bucharest National Opera (ONB) offers a new performance in the Verdi-Wagner bicentennial series: Giuseppe Verdi’s Rigoletto, with a libretto by Francesco Maria Piave, based on Victor Hugo’s “The King Amuses Himself.” The special guests of the evening will be Romanian tenor Robert Nagy, interpreting the role of the Duke of Mantua, everthing under the wand of Adrian Morar.

April 18, 20.15
The famous American choreographer John Neumeier is well-known for his sensitivity in combining music and dance. In the show inspired by “The Third Symphony” by Gustav Mahler, composed as an ode to creation, the singers and chorus accompany the dancers’ elegant moves, taking the audience through an emotional journey. Conductor Simon Hewett. Choreography and sets John Neumeier

April 19-21
Baneasa Shopping Center
Specialists from City Garden will share the tips and tricks of arranging the garden and will offer free sessions of gardening counseling, due to professional software. Children are invited to take the first steps into the world of gardening in a fun tree planting workshop.

Until May 16
“Cocinando al pie de la letra/ Books and Dishes” is an exhibition held by poetess Yolanda Castano and photographer Andrea Costas, a photographic journey between literature, cuisine and art.

The Human Body
Antipa Museum
Until June 30
One of the most realistic exhibitions in the world, The Human Body, will stop for the first time in Bucharest, at Antipa Museum, from March 22 to June 30. The exhibition includes more than 200 pieces – human bodies which through dissection of organs and tissue offer a three dimensional perspective of the miracle of the human body.

Common Nostalgia
Pavilion Unicredit (36 C.A. Rosetti)
Until July 7
In the exhibition “Common nostalgia”, which will be open between April 4 and July 7, the artists started from the premise that the subjectifying of the loss and the objectifying of the feeling of losing something that could reduce the consistency of the nostalgic type of living, because the exhibited works assume to reach all means of the idea of nostalgia. From “love”, a feeling coming from a casual past, which becomes the subject of what can be assimilated, to the “nostalgia” of the family memories, micro cosmos, of a place with your own people. (“Ostalgia” is a sociological german term coming from “nostalgia” and “ost” which means “east”, therefore nostalgia of the East, in its geopolitical meaning.
Curator: Eugen Rădescu. Participants: Dan Raul Pintea (RO), Ștefan Sava (RO), Nicolae Constantin Tănase (RO), Swel Noury (MAR)

You’ll step into another world when you dine at Roberto’s. Soft lighting, frescoes of Italy on the walls and terrace views make this a romantic venue for lunch or dinner. Locals and guests alike enjoy antipasti over fine Italian wines. A review of this restaurant can be read here.
Oana Vasiliu