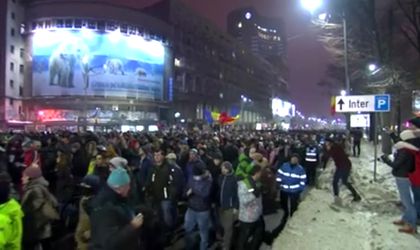 Up to 30,000 people attended a protest in the center of Bucharest, on Sunday evening, while other several thousands protesters gathered in other Romanian cities and abroad, to express their anger at the government’s plan to adopt a pardon bill alongside amendments to the Penal Code.

This was the third time this week that people took to the streets after the center-left government led by Sorin Grindeanu put up for debate a draft bill that would pardon certain detainees that have received jail sentences under 5 years. Over 3,000 people behind bars could get out if the law is passed.

The president and the main anti-corruption institutions reject the changes

The legal changes have been vigorously criticized by the anti-graft department (DNA) and by the General Prosecutor’s Office. The investigators warn that such changes would dent Romania’s ongoing efforts to combat corruption.

In Bucharest, president Klaus Iohannis briefly joined the protesters and criticized the initiative of the ruling coalition to amend the Penal Code. The people marched through freezing cold from University Square to the Victoriei Square, where the building of the government is located. From there, they went to the HQ of the ruling party PSD to shout against the head of the social democrats, Liviu Dragnea, who met late this week with US president Donald Trump.

“A gang of politicians with legal issues want to change the legislation in Romania, aiming to weaken the rule of law. This can’t be admitted. It is inadmissible to change the law so that dozens, hundreds of politicians that broke the law to have their files cleaned and to continue to break the law. Romanians have every right to be outraged,” said Iohannis, who had previously asked the government to withdraw these draft bills.

Video from the official Facebook page of president Klaus Iohannis

Leaders of the political opposition attended Sunday’s protest in Bucharest. Meanwhile, the leader of the anti-system Union to Save Romania, Nicusor Dan, said his party was preparing a motion against the minister of Justice, Florin Iordache. The liberals, led by Raluca Turcan, said they would back this move in Parliament. The PNL is also planning a confidence motion against the government formed by left wing PSD and center right party ALDE.

The protests have erupted less than one month since PM Sorin Grindeanu was sworn into office.

At the moment people are also calling for the resignation of Grindeanu’s government and some are calling for early elections. The TV news stations that are close to the Social Democratic Party accused Iohannis of backing a “coup” because he attended a protest that was not authorized against a government that was formed following fair elections.

Victor Bostinaru, the MEP representing PSD, said that by joining the protesters, Iohannis “made the worst thing out of all presidents that led Romania  since the 90’s.” He added that if this conflict continues like this, the head of state will have to be suspended by the Parliament.

In a lengthy message posted on Facebook on Sunday evening, Dragnea accused the president of initiating a coup.

“The president of the country breached the law today, for personal political advantages and asking for constitutional aberrations: the withdrawal of an ordinance, especially of the ones that weren’t even issued,” wrote Dragnea.

The head of the socialists added that he wants the governing program to be fully implemented despite the “selfish political game of president Iohannis.”

Following Sunday’s protests, the political tension between president Iohannis and the ruling coalition PSD-ALDE that controls the Government and the Parliament, is likely to climb to new heights.