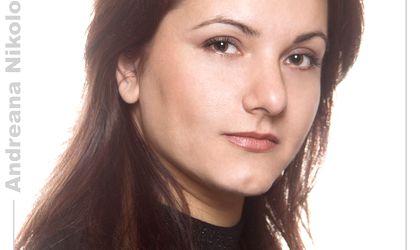 The Bucharest National Opera (ONB) is now taking part in the most important musical celebration of this year: the celebration of 200 years since the birth of composers Richard Wagner and Giuseppe Verdi (1813). The celebrations will start with “Aida” on January 24, starring guest stars mezzosoprano Andreana Nikolova (Amneris) and tenor Kamen Chanev (Radames).

Shows like “La Traviata”, “A Masked Ball “, “Nabucco”, “Rigoletto” and “Macbeth” (Giuseppe Verdi), and “The Flying Dutchman” and “Lohengrin” (Richard Wagner) can be watched and listen by opera lovers on this occasion.

Mezzosoprano Andreana Nikolova (in picture) graduated from the Ruse Arts College in 1997 and the same year she attended the mastership course taught by Pavel Gerdjikov and Norman Schetler. In 2002, she earned an MD in vocal music from the Academy of Music Sofia. She performed on the Bucharest Opera stage in “The Marriage of Figaro”, “Carmen” and “Il Trovatore”.

Bulgarian-born tenor Kamen Chanev graduated from the “Pancho Vladigerov” Academy of Music Sofia and attended specialized training classes in Rome under the guidance of Boris Hristoff, Alexandrina Milcheva and Gheena Dimitrova. A laureate of the “Jussi Bjorling” Contest in Sweden, Chanev was invited at Wiener Staatsoper to play Des Grieux and Pinkerton in “Manon Lescaut” and “Madama Butterfly”. In Bucharest, he will perform in “Aida” and “Il Trovatore” by Giuseppe Verdi, as well as in “Tosca”, “Manon Lescaut” and “Turandot”.