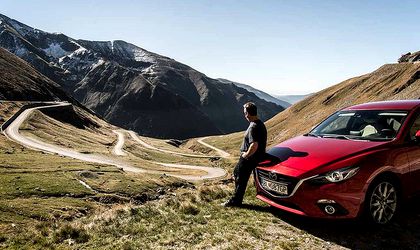 Journalist Andrew Maclean from www.drive.com.au has been driving through Romania in search of a driver’s paradise, as he wrote, and it appears he found it.

“This is the unique part of the Transfagarasan, where it looks as though the Nurburgring has been stretched over postcard scenery. It’s got a greater variety of corners than the endless series of hairpins that makes up the Stelvio pass, with fast sections flowing into closing radius bends, switchbacks opening up into short climbs and everything in between. And it is epic to drive, not only for the layout of the road itself, but because you can use it all as you can see everything ahead of you, plus there’s little to no traffic (if there is, they politely move aside into the multitude of turn outs anyway) and only the occasional cyclist bursting his lungs”, writes the journalist, after a long description of how was his route from Bucharest up until the Transfagarasan road. His verdict was that Trasfagarasan represents “one of the greatest driver’s playgrounds – yep, In the Worrlld!”.

He also enjoyed Transalpina road, considering it “almost as good … in bits. And more even more adventurous to find”, mentioning also “Its biggest problem is, it seems as though whoever started fixing it up didn’t finish the job as around every second corner or so there’s a river of gravel or a pothole or both. And then there’s the odd flock of sheep to avoid …”

The entire article can be read here and below you can see a video he has made about Romania.