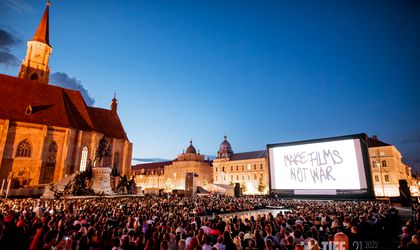 Utama, the debut film of director Alejandro Loayza Grisi, was chosen as the big winner of the 21st edition of the Transilvania International Film Festival  and awarded the EUR 10,000 Transylvania Trophy. The Bolivian production also won over the TIFF audience, and was also awarded the Audience Award of EUR 2,000 by MasterCard, as voted by the filmgoers at the Festival.

A moving story about a couple of llama farmers facing drought, Utama stood out for its “simple, clean and poetic cinematic approach”. At the event, the director took the stage to collect the Transylvania Trophy, presented by Icelandic actress Halldóra Geirharðsdóttir, member of the Jury of the Official Competition, together with director Bogdan George Apetri, producer Gülin ÜstÜn, director Srdan Golubović and Carlos Rodríguez Ríos, Director of the Barcelona Auteur Film Festival.

The EUR 3,500 Best Director Award went to filmmaker Guðmundur Arnar Guðmundsson, awarded for the “credible, original and brilliant universe” he created in Beautiful Beings. For their exceptional roles in The Night Belongs to Lovers, actors Laura Müller and Schemci Lauth, were awarded the Best Performance Award of EUR 1,000 by Conceptual Lab by Theo Nissim.

“A film that starts from a concrete and natural slice of life and turns into a subtle and profound vision of existence”, Feature Film About Life (d. Dovile Sarutyte) won the Special Jury Award of  EUR 1,500 from CEMACON. A Special Mention was awarded to the actress Eszter Csonka for her role in the film Gentle (d. Gentle, Anna Nemes).

The ceremony, presented by Tudor Giurgiu, the Festival’s President, together with journalist Amalia Enache, was broadcast live on the Festival’s Facebook page and YouTube channel, giving film lovers everywhere the opportunity to enjoy the evening’s surprises from afar. Together with more than 2000 spectators, they enjoyed two live musical specials by The Mono Jacks and Mihail, and admired the guests’ red-carpet appearances. Among them were actors Marius Manole, Mălina Manovici, Adrian Titieni, Emanuel Pârvu, producers Ada Solomon and Claudiu Mitcu, or TV stars Andi Moisescu, Andreea Esca and Pavel Bartoș. David Popovici, the Romanian swimmer who recently arrived from the World Swimming Championships with gold medals in the 100 and 200 metres freestyle, surprised those present with a video message of thanks to his supporters in Cluj-Napoca.

A very special moment was the speech of actress Maia Morgenstern, winner of the Mercedes-Benz Excellence Award: “This moment of homage moves me very deeply, sincerely. It is a moment of assessment. When you ask yourself, what did you have to give up? And I’m deeply grateful to TIFF and everyone who made this moment possible. I’m grateful to each and every one of you!” said the actress who has dedicated more than four decades of her life to the stage and big screen.

Miracle, the second feature film directed by Bogdan George Apetri, won the Romanian Days of Film Award for the Feature Film section, worth EUR 10,000 (consisting of film reels and post-production services), offered by Cinelab Romania. The Romanian Film Days Award for Debut, worth  EUR 1,000, offered by Banca Transilvania, was awarded to Alina Grigore, author of Blue Moon, awarded the Grand Prize in 2021 at San Sebastián.

The ZFR Jury also awarded a Special Mention to the film Man and Dog, directed by Ștefan Constantinescu. The most voted local film at this edition, Victor Canache’s debut, The Goat with Her Three Kids, was awarded the Audience Award for the most popular Romanian film, worth EUR 1,500, presented by Dacin Sara and presented on stage by Mircea Geoană, NATO Deputy Secretary General.

The Romanian Film Days Award for the Short Film section, worth  EUR 5,000, in the form of equipment, camera, electrical and grip services provided by CutareFilm, was awarded to Aurică, A Dog’s Life, directed by Mihai Dragolea. In the same section, the jury also awarded two Special Mentions to the films The Inheritance, directed by Marian Fărcuț, and Fragmentations, directed by Miruna Minculescu. The FIPRESCI Prize, awarded by the jury of the International Federation of Film Critics to a film in the ZFR section, went to the feature film Immaculate, directed by Monica Stan and George Chiper-Lillemark.

The documentary You Are Ceauşescu To Me, directed by Sebastian Mihăilescu, was awarded the What’s up, Doc? section prize of EUR 2,000 by TenarisSilcotub. In the same section, opened to competition from this edition onwards, a Special Mention was also awarded to the film Atlantis, directed by Yuri Ancarani. The full list of awards can be accessed on the Festival website.