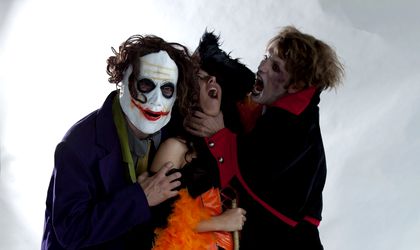 If you didn’t make your plans for this weekend, check out several highlights from arts and culture program here.

Coyote Café is hosting a charitable Halloween party for Florin, a young man who needs two brain operations. The fun will start at 21.30, on October 30.

Upmarket club Gaia Boutique extends an invitation to the We Suck II party, with the promise that guests will feel fear and their only hope of surviving is to become one of the monsters.

For those who are up for a thriller party, Kristal Glam Club is the place to be on October 27.

Fire Club is throwing two Halloween parties, one on October 27 and the other on October 31, entitled Zombie Attack, with free Bloody Mary cocktails for the first 100 to arrive.

Serendipity Tea House celebrates the pumpkin on October 28. The most inspirational carved pumpkin will be awarded with vouchers that can be used in the tea house

Visitors will find sweets and delicacies such as homemade cookies, traditional Romanian cakes (cozonac), pies, honey, baklava, different types of chocolate, muffins as well as Belgium pralines, tea and coffee. Baking demonstrations will also be given.

In the field of sculpture,Romania is known worldwide for Constantin Brancusi’s masterpieces. But another 22 local artists from the 20th century who have contributed to the country’s canon are now being marked in Bucharest. Some 75 of their wood sculptures from a period of almost 80 years are on display in this temporary exhibition. More details, here.

Started in 2000, Kinofest is the first digital film festival in Romania and one of the most significant in the Central-East Europe. The film competition has three sections (Animation, Fiction, Micromovie), with three distinct juries. Each competition will have only one winner: Best Animation, Best Fiction, Best Micromovie. More details here.