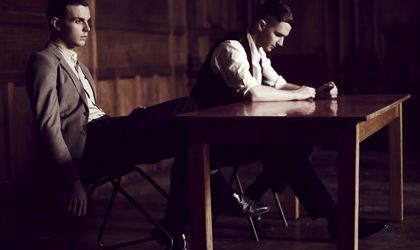 An established cult rock group, The Stone Roses, and a pop duo aspiring to international fame, Hurts (in picture), will be headliners of the Summer Well Festival which will take place on August 11-12 at the Stirbey domain in Buftea, Bucharest.

Manchester pop duo Hurts are coming back to Romania to perform on the first day of the Summer Well festival. Hurts are preparing for the release of their second album after their first studio effort Happiness was a smash, paving the way to worldwide acclaim. The duo is made up from singer Theo Hutchcraft, originally from Richmond in North Yorkshire, and synth player Adam Anderson.

The band shot to fame when they released the single Wonderful Life, which successfully combines the 80s sound re-wrought with a modern elegant touch. The album also comprises a duet with Kylie Minogue entitled Devotion, the Australian singer being one of the band’s devoted supporters.

British cult band The Stone Roses will luckily be making a stop in Romania as well after they announced, on October 18, 2011, that they would be reuniting. Just 3 days later, they set a record by selling 220,000 tickets within slightly more than an hour for just 3 concerts. Even though they released just 2 albums during a meteoric career, The Stone Roses, released in 1989 and The Second Coming, which came out in 1994, the band left an indelible mark on the music of the period, being one of the pioneering bands of the Madchester movement, active until the early 90s.

With a charismatic and much beloved frontman, Ioan Brown a.k.a. King Monkey (who also performed solo in Romania last year), The Stone Roses’ reunion was much expected. Their most famous songs include Fools Gold, Love Spreads, I Wanna Be Adored, Waterfall and She Bangs the Drums. A concert by The Stone Roses’ was the trigger for Liam Gallagher, frontman of Oasis, to form a band himself.

Other artists that complete the Summer Well line-up are Patrick Wolf, The Asteroids Galaxy Tour, Wolf Gang, Citizens! (on August 11) and The Vaccines, Glasvegas, The Big Pink and Zulu Winter (on August 12).