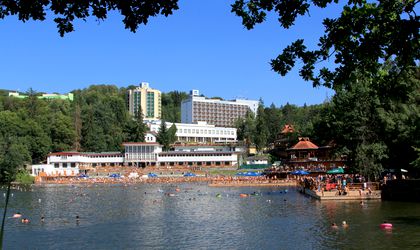 After reporting a turnover of RON 36 million (approximately EUR 8 million) in 2015, the Danubius Sovata hotel group plans a five percent growth for this year. The hotels’ owner, Danubius Group, which is present in several regional markets, has invested EUR 7 million in its local properties during 2013 and 2014 alone.

The three hotels the Danubius hotel group owns in the Sovata spa resort, central Romania, have reported some 43,000 tourists in 2015. The number has been on the rise in recent years, say company representatives, as spa tourism has increased in popularity and also due also to the investments the group has made locally.

Danubius Health Spa Resort Sovata (four stars,) Danubius Health Spa Resort Bradet (four stars) and Hotel Faget (two stars) were taken over by Danubius in 2000, which has since invested locally over EUR 20 million, Erik Szoboszlai, the sales director of Danubius Health Spa Resort Sovata, told BR. The complex has close to 400 rooms and an integrated spa and medical treatment base. The largest investment to date has been the USD 10 million which went into buying the properties. The rest was invested over the following years in refurbishing the hotels and upgrading and expanding the spa. Most recently, Danubius has invested EUR 8 million between 2013 and 2014 in upgrading the Bradet hotel from a two-star to a four-star classification.

And this will not stop here, says Szoboszlai, albeit in 2016 the investment budget level will be below that of the last two years. This year, the company will continue to invest in refurbishing one or two floors of hotel Sovata and a full upgrade of Hotel Faget is planned for 2018, added the sales manager.

Of the 43,000 guests reported in 2015, some 13,000 were Romanians and the rest were foreigners, mostly from neighboring Republic of Moldova and Hungary and EU countries such as Germany, France and Italy. In 2015, the hotels also registered guests from Israel, Ukraine and Russia. “Romanian tourists spend on average about three, four days with us while their foreign counterparts come here for the spa and stay for at least a week,” explained Szoboszlai. The hotels had an average occupancy rate of over 60 percent last year with the peaks reported during July and August when the occupancy went above 90 and 95 percent, respectively, according to company data.

Overall, the complex in Sovata generated a turnover of RON 36 million (approximately EUR 8 million) in 2015, up by 20 percent y-o-y, albeit much of this growth was generated by the fact that only following the refurbishment, hotel Bradet could function at full capacity. The Danubius Hotels Group operates 56 hotels in Hungary, Great Britain, the Czech Republic, Slovakia and Romania. Over the years the local business has grown, but even so it still contributes a small share of about five, six percent to the group’s overall revenues. This year the group has budgeted a growth of about five percent, which Szoboszlai estimates will come both from the number of tourists going up and the slight price increase. “We estimate the domestic market will go up. We already see this happening on the corporate segment with companies spending more on events such as team-buildings. We also hope the holiday vouchers will help the market,” he added.

One thing is for sure, the spa tourism is becoming more popular on the local market. For the group, spa and leisure activities generate about 60-65 percent of the group’s revenues in Romania.

Salt extraction in Sovata dates back to Roman times and according to some sources, the town was recorded as a resort as early as the end of the 16th century.

Its main tourist attraction is Bear Lake (Lacul Ursu,) which covers over 40,000 sqm, making it the largest salted heliothermal lake on the continent. What does this mean? On the bottom of the lake the salt concentration reaches 300 grams per liter, a level similar with that of the Dead Sea but this concentration gradually drops towards the surface. The top layer on the surface is made up of about 10-15 centimeters of unsalted water which acts as a lens and enables the sun to warm up the lake up to a depth of two meters, thus creating the heliothermal effect.

During summer months, the lake and its banks are swarming with tourists as is the smaller nearby Alunis Lake. Water and mud from Bear Lake are used in the spa and the treatment base and are recommended for the treatment of rheumatic, cardiovascular, respiratory and even fertility-related medical problems.

Danubius Group manages the lakes and has invested in recent years in landscaping the banks and the surrounding area which offers tourists numerous hiking trails through the nearby forest to three other lakes or around the Salt Mountain. Near Sovata, tourists can visit the Praid salt mine or the village of Corund, famous for its pottery. During the winter, there is also the option of skiing on the two slopes available at Alunis.

Sovata is located in Mures County, some 320km or around six hours by car from Bucharest.