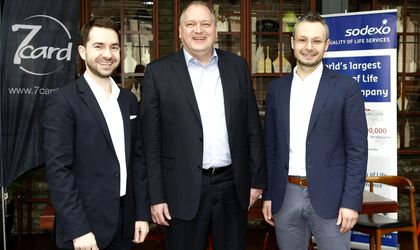 The transaction was finalized in February 2016, with Benefit Seven’s three shareholders each selling a part of their shares.

Founded in 2011 by Andrei Cretu and Iulian Circiumaru, the Benefit Seven’s main product, the 7card membership card, allows companies to offer their employees access at reduced cost or no cost at all to 230 gyms in five big cities and 3 small ones throughout Romania, including Bucharest, Cluj-Napoca, Timisoara, Iasi, Brasov, Ploiesti, Craiova and Pitesti.

At the moment, Benefit Seven has in their portfolio around 400 companies and over 10,000 active memberships. “We have 400 companies, and in order to reach our figures by the end of the year, we will probably end up having around 1,200 by the end of this year, so it’s not only a doubling, it’s a tripling [of the current number],” said Cretu, in a press conference on Thursday.

“We already have in our portfolio some of the large companies, and we envisage that by the end of the year we will start to expand our portfolio with medium and small-sized companies,” he further added.

In terms of how the company’s done since the beginning of the year regarding number of memberships, “we started the year with almost 10,000 and already by the end of February we are exceeding 12,000,” stated Circiumaru. In 2015, the company registered a turnover of EUR 1.8 million, almost double the numbers from 2014, and the plan for 2016 is to raise the number to around EUR 3.5 million, he added.

Both the two co-founders of Benefit Seven and Balint Bessenyey, CEO Sodexo Benefits and Rewards Romania, talked about growth in the fitness industry and on the employee benefit market. Regarding the latter, in some of the industries that are “really competing for the workforce,” such as the automotive one in Timisoara, “7card is becoming a must-have for companies in their benefit package. In Bucharest and Cluj, the same situation is with the IT industry,” explained Circiumaru.

The 7card program is exclusively addressed to companies and their employees. Furthermore,”7card is priced a bit lower than the average subscription” at a gym, with the price depending “on number of employees and company involvement,” according to Cretu. “There are a lot [of companies] that cover 50-80 percent of the cost,” added Cretu, further saying that the price range for Bucharest, for example, is between RON 100-150 per month, while outside Bucharest it varies between RON 65-100 monthly.

As for future plans, the short-term development strategy for Benefit Seven is that in 2016 and 2017 the service will be offered at the national level by consolidating their presence in the country’s main cities, and afterwards they have in their sights expanding their activity outside of Romania, in Central and Eastern Europe, according to the company.