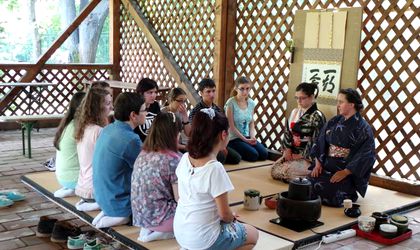 The Sakura Japanese school in Bucharest aims to “make the Japanese language accessible” to the public, registering in 2015 a turnover of approximately EUR 250,000 and planning to increase that number by 25 percent in 2016, according to a company press release. Since the start of the school, the Sakura owners have noticed a gradual increase in the interest shown by Romanians for the Japanese culture, including on behalf of companies looking for traditionally-themed events.

Half of the 2015 turnover came from the Japanese language school side of the business, where “those who opt for the Japanese classes are preponderantly students interested in the language or culture”, with a total of around 1,500 persons having followed the classes since 2011, adds the company. Of the participants, “approximately 70 percent of those who follow the first module of Japanese language continue the classes”, while after the second module the rate falls to 60 percent, further stated Sakura representatives.

The rest of the 2015 turnover was divided between programs and excursions in Japan (30 percent) and business consultancy and Japanese-themed events (20 percent), according to the company.

Sakura was started in 2011 with the opening of the Japanese language school after an investment of EUR 15,000, entirely from the owners’ private funds, and so far the center has received “no external help”, said the two entrepreneurs behind the initiative, Cristian and Alexandra Jidiuc, to Business Review. After that, the first tourist program in Japan was held in 2013, and in 2014 they started organizing traditionally Japanese-themed corporate events and in 2015 they developed the business consultancy division.

This latter side of the company represents “services for obtaining residency permits, trainings adapted for Japanese citizens in Romania but also translation services,” said Cristian and Alexandra Jidiuc (photo to the left), the entrepreneurs behind the Sakura school, to Business Review.

A novelty for the company was its January Romanian-themed event organized in Tokyo, which consisted in a wine tasting and sampling of traditional Romanian products. Approximately 30 Japanese persons participated, “from middle and top management, interested in experimenting a new culture”, said the owners. Following the turnout at that event, “we have already set the next one to promote the Romanian tradition, on the occasion of the Easter holidays”, they added. The aim of these events is to increase the interest of the Japanese in Romania, “but also to attract representative Romanian brands to promote themselves in Japan”, the two further pointed out.

For 2016, the company is aiming to increase their turnover with approximately 25 percent through “developing the business consultancy division and the Japanese-themed events”, added the company. Within this area, they estimate an increase in Japanese-themed corporate events, with offers such as tea ceremony, traditional calligraphy, gastronomy and origami being available for companies.

Sakura also plans on using its tourist programs to facilitate growth in 2016. “Trips are organized in small groups, of maximum 8 people, with guides who know the culture and Japanese language and are personalized” to suit the participants, says the company.