Rigoletto staged for the Verdi-Wagner Year at Bucharest National Opera 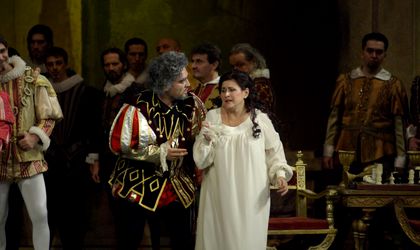 The Bucharest National Opera (ONB) offers on February 1 a new performance in the Verdi-Wagner bicentennial series: Giuseppe Verdi’s Rigoletto, with a libretto by Francesco Maria Piave, based on Victor Hugo’s “The King Amuses Himself.”  The special guest of the evening will be Romanian tenor Cristian Balasescu, interpreting the role of the Duke of Mantua for the first time on the ONB stage.

Shows like “Aida”, “La Traviata”, “A Masked Ball “, “Nabucco”, “Macbeth” (Giuseppe Verdi), and “The Flying Dutchman” and “Lohengrin” (Richard Wagner) can viewed by opera lovers on this occasion.

Alongside the world’s great lyrical theatres, ONB celebrates the most important musical anniversary this year: 200 years since the birth of composers Richard Wagner and Giuseppe Verdi (1813).

The event will be staged on February 1, starting hour 19.00. The tickets can be bought from here.