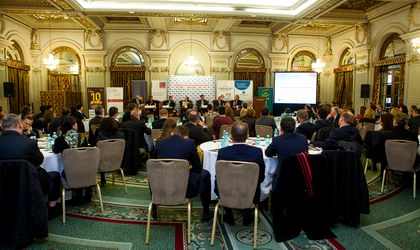 How well the local workforce is adapted to the needs of the business environment, the latest fiscal changes announced by the authorities, how next year’s elections will affect the business environment, and how the local economy looks for 2014 from the perspective of French investors were among the main topics discussed during BR’s fifth French Investors Forum, organized last week.

French investments were on the rise in 2013 and companies from the Hexagon have a positive outlook for 2014, said participants at the event. With more and more French firms relocating from China to be closer to home, Romania should be able to attract some of these investors, said Philippe Garcia, director of the economic mission Ubifrance. “Companies from logistics, transport, industry and food production can find in Romania what they were looking for when they left for China,” he added. This is something that could be observed in 2013, but Garcia expects the phenomenon to continue throughout 2014.

France remains Romania’s fourth largest trading partner and the third largest investor in the country, with a EUR 7.2 million stock of FDI. In 2012, bilateral trade between the two countries amounted to EUR 6.2 billion, out of which Romanian exports to France represented EUR 3.2 billion. France on the other hand exported more to Romania than it did to China or India, and as much as it did to Brazil, added Garcia.

French companies already have a strong presence in Romania, but this could increase even further over the coming years with the right conditions in place, said participants.

A word from the authorities

Addressing participants’ concerns over fiscal stability and the latest tax changes announced by the authorities, Virgil Daniel Popescu, state secretary at the Ministry of the Economy, said that leaving aside “media exaggerations over the new taxes”, the government is firmly committed to increasing the tax base and lowering taxes.

When first arriving in Romania, many investors find the legal system convoluted and the tax system unstable, but this is only a first impression, thinks the official. “We have a 16 percent flat tax which hasn’t changed in six years, and the government has promised to cut social contributions by 5 percentage points from June 2014 (…). As for the tax on special constructions, this is something which exists elsewhere in Europe and Romania hasn’t had so far,” he added. In order to improve communication between investors and the authorities, the Ministry of the Economy, which is currently undergoing a restructuring process, will set up a dedicated department to act as an interface between investors and the authorities, he told participants.

The future of French investments in Romania depends as much on global and regional economic developments as it does on the authorities’ capacity to ensure a stable and predictable business environment and speed up investments, in infrastructure in particular, said panelists.

“I am generally optimistic, but I would also like to highlight several aspects to which Romania should pay attention,” said Philippe Gustin, the French ambassador to Bucharest. He stressed the need for the authorities to foster more stability, predictability and coherence. “Investors hate uncertainty. The rules of the game can’t be changed overnight, especially when we are talking about large-scale investments,” he urged.

The ambassador also expressed concerns about the way next year’s elections could affect the economy. “I hope this will not act as a brake, but the contrary,” he added.

Antoine Aoun, head of purchasing at Renault Dacia Romania, said that while it was hard to make predictions for 2014, it is vital the authorities take the necessary measures to ensure that competitiveness is maintained. The company performed well in 2013 despite the fact that new car sales dropped this year in Romania, while imports of second-hand cars were on the rise. Moreover, Aoun expects no major changes in 2014 in terms of new car sales. Dacia produces some 1,400 cars per day at its Mioveni plant, but one month’s production is enough to cover local demand. “What would we do if we didn’t export?” he said.

Human capital above all

Romania’s workforce remains the country’s greatest resource, stressed Gustin. The announcement earlier this year of several relocations to Romania proves this, added Adriana Record, executive director of the French Chamber of Commerce, Industry and Agriculture in Romania (CCIFER). For example, French tire manufacturer Michelin announced in March that all its marketing operations in Greece would be coordinated from Romania from 2014. The manufacturer operates three factories locally. Two months later Societe Generale said it was planned to cut costs by EUR 900 million by 2015, by cutting jobs in France and relocating some activities to Romania, Morocco and India.

Overall, the balance between the quality and the cost of the local workforce in Romania remains one of the most attractive in the region, despite the fact that salaries have gone up in recent years, confirmed Manuela Furdui, managing partner at Finexpert. She added that other factors that are attractive to French companies looking to invest in Romania are the 16 percent flat tax and the state aid schemes, two of which will be prolonged until the end of June 2014.

While Romania’s workforce is a plus, not all is good, said participants. There is a growing need for trained people in technical fields other than IT, which the local education system fails to meet. Should the state not take into consideration the actual needs of the labor market and invest more in education, some trades could simply disappear, argued participants.

A November 2013 opinion survey carried out by the CCIFER among 150 local companies found that there is a generally positive economic outlook fueled mainly by good performances at the companies’ level. This was the most positive result since 2011, said Record. French firms doing business in Romania are aware of the opportunities presented by the local business environment, but this perception is not always shared back in France. “It is true that Romania suffers from an image problem. Those who are already here want to stay,” stressed Dana Gruia-Dufaut, lawyer at Gruia Dufaut Law Office and the event’s moderator.

The CCIFER and the Ubifrance economic mission hope that some of this will be changed by the regional forum to be held this February in Bucharest, which will be attended by around 100 French firms. “There is no better ambassador for Romania than a company coming here, discovering the gap between the perception they had before coming and the reality, and going back to spread the word,” said  Garcia.