Power to the people? Bucharest street protests come under gaze of documentary-maker 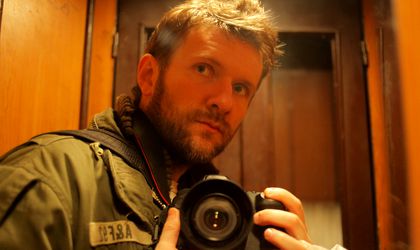 Over 23 years since the Romanian Revolution, the people were back on the streets of Bucharest, reclaiming the public space and fighting to change the political system. Director Vlad Petri followed their stories for a year, from the first days of the protests to the referendum to remove the president, crafting them into a documentary about the people transforming a revolution into a travesty.

Bucharest, where are you? has been called a revolutionary movie. Is it?

It is a movie about the people who protested in those days, an X-ray of Romanian society. Initially, I considered my documentary a revolutionary one because I was part of that movement that believed we could change the system, the government, even the president. But after working on putting the material together, I found that the attempt at revolution was shrinking daily, transforming the cause into a live performance.

After your first day at the protest, you posted a movie on YouTube that got tens of thousands of viewers in just one day. Was this the online hook that persuaded you to make a documentary?

The desire to make a documentary movie came later, but the online environment helped me realize that I was doing a good job, that people were supporting me and my work. The feedback was very important in encouraging me to continue to film what was happening on the street.

Did you ever feel fearful while shooting the protests?

Probably on January 15, 2012, when I was filming behind the line that the gendarmerie had formed and people were throwing stones, recycling bins, bottles and many other hard objects. That was a point when I couldn’t control what I was filming anymore as I had to look up to check if something was about to hit me. The special forces then used teargas and I remembered waking up that night coughing really badly.

In your opinion, what does a protest mean to Romanians?

This is a question I haven’t found an answer to yet, but I’m still looking for it back on the streets and through my research. Over 23 years on from the Romanian Revolution, I believe that Romania had no “culture” or experience of protests, which is why the street demonstrations which started in January 2012 took everyone by surprise, from mass media representatives to members of the public. Moreover, the protest spirit had slowly declined since the 90s, especially as regards unions and student associations.

How do you compare the protests in 2012 with those that began in the autumn of 2013?

First, the common ground of the two protests was the space, University Square. Then, I believe that 2012 was the bedrock of the future protests, as some citizens, both activists and leaders, who protested in 2012 came back to support the Rosia Montana cause in 2013. Moreover, those people already had the street experience of confronting the gendarmerie and the police, which both switched tactics because they knew that using violence again would only lead to more media attention. Besides that, in 2012 all sections of society were represented in University Square during the protests, whereas in 2013 the people in University Square were highly educated, mostly young adults, who were there for one concrete cause: to stop the mining project in Rosia Montana.

The first protests started because of the removal of Raed Arafat as state secretary. Did those people know who Raed Arafat was?

Apparently, the protesters remembered the cause of the demonstration only for two-three days, and then everything degenerated into a protest against the whole Romanian system, especially against the president. But to answer the question, I am pretty sure that most of them didn’t know what Arafat was doing, but they associated him with the medical system and his attempts to improve it.

You said that people switched from Arafat’s cause to chanting slogans against the president. During the three months of the daily protests, was there a common voice of the street?

Very soon a divide appeared between the people positioned near the fountain in University Square and those who were in front of the National Theater, who were much more vociferous and mass-media “friendly”.

As a director and protestor in the street movement, what did you feel when you learned the results of the referendum to impeach the President?

It was a strange combination between my solidarity with those people who were in the street for so many months and who truly hoped to change the political system and the showing-off that happened there. I filmed scenes that are not in the movie when the protesters from the National Theater moved a fence to occupy the boulevard, and at the end of the day, they put the fence back, blocking themselves back in the pen that the gendarmerie had made for them.

You have already presented the film to foreign audiences at Rotterdam Film Festival and recently at the Transilvania Film Festival. What were their reactions?

At Rotterdam International Film Festival, Bucharest, where are you? was included in a category named The State of Europe, among other films that reflect the street movements happening all over Europe. This timid Romanian street democracy was received calmly by the foreigners, whereas the Romanians were very emotional after seeing my movie. This is probably the reason I am more attached to the Romanian public.

Are street movements forming a new wave in documentary movies?

Clearly, it already exists and probably soon it will have reached saturation. For example, next month I’m presenting the film at the Odessa International Film Festival in a special section with Maidan, a movie that was presented at Cannes, and The Square, a film about Egypt that was at the Oscar’s, among many others. If this type of movie has reached the biggest film festivals worldwide, it is of obvious interest to them. But I still believe that my movie is about the people that made it a movie, not about the social cause.

Why is the movie entitled Bucharest, where are you?

The key of the title can be found while watching the movie, and viewers answer this question themselves. At the beginning, we proposed Again in the street, which would have linked the events from 1989 with the present moment, and Bucharest 78 decibels, after the level of noise in University Square, but we finally alighted on this general title, both asking where the people are when you need them, and presenting everything as a barometer of Bucharest.