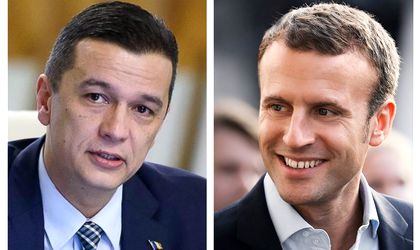 Romanian PM Sorin Grindeanu welcomed the victory of Emmanuel Macron, the leader of the En Marche! political movement in the second round of the presidential elections.

Grindeanu said in a Facebook post that Macron’s victory brings good news for Romania and the rest of Europe.

“Congratulations to Emmanuel Macron for the historic victory in the French presidential elections. Today, the French citizens discourage the anti-Europenism and extremism. This victory is good news for Europe and for Romania,” said the Romanian PM.

According to initial estimates, Macron got around 65 percent of the votes, with the score representing a crushing defeat for Marine Le Pen, the leader of the extremist National Front party. Le Pen has conceded defeat in the elections.

“I will fight with all my strength against the divisions that separate us,” says the next president of France, according to the BBC. “I will work to renew the links between Europe and its citizens,” said Macron, who at 39 will be the youngest president in the history of France.

Donald Tusk, head of the European Council, tweeted that Macron’s win is a victory for liberty, equality and fraternity over the “tyranny of ‘fake news'”.

The abstention during the second round of elections is projected to have reached 25.8 percent, possibly the highest rate in a presidential run-off in decades, according to the BBC.