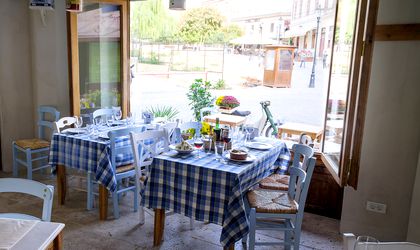 Any expatriate Greeks feeling despondent at the beleaguered state of their home economy can now cheer themselves up with a hearty yet healthy meal at the latest addition to the burgeoning Old Town gastronomy scene, Meze.

Situated at 6 Strada Nicolae Tonitza, the location opened earlier this month, the result of a EUR 270,000 investment in the premises, which took five months to knock into shape. Restaurateur Andrei Iusut, who also owns Turkish eatery Divan, estimates the recovery time for the investment at four years.

He said he had lured top Greek chef Georgios Kritos away from his own acclaimed restaurant, which features in the Alpha Guide – a Greek equivalent of France’s Michelin Guide – and won a Gourmet Award 2010-2011, as one of the 12 best traditional Greek restaurants, to run the kitchen at Meze.

The eatery has 40 covers inside and another 80 on the terrace. Decorated to represent an authentic Greek tavern, it has quirky touches such as empty olive cans as lampshades and old motorcycles outside demarcating the terrace. Iusut hopes that Greeks and other expats and tourists will feel at home in the restaurant. He adds that Divan attracts officials from the embassies of Turkey and other Islamic nations.

Kritos says that the menu, for which he was given a free hand, draws on the best Greek ingredients cooked in simple combinations, not “one thousand different ingredients”.

The menu at Meze, which takes its name from the selection of small dishes served in the Mediterranean and Middle East, was designed to be healthy. Kritos said, “I had in mind that you must sleep after eating, not walk in circles on your balcony and take pills. The chef must think of the health of the customer.”

Iusut said a typical meal for two at the restaurant would cost about RON 170, but that it was important that diners perceived value. The price was due to expensive ingredients being used. He said that there had been some difficulties in arranging the space, which had led him to the concept of a tavern.

He added that one advantage of Meze was that there was parking space nearby. “In the historic center lunch is practically non-existent as there is nowhere to park,” commented the restaurateur.