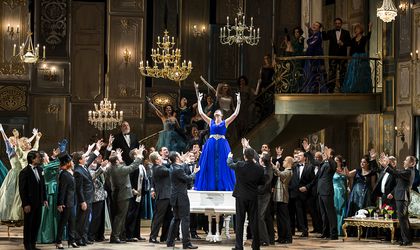 Bucharest National Opera house has just emerged following an extensive facelift – and the renaissance of the iconic cultural institution is being marked by another debut: a new version of Verdi’s La Traviata. The premiere took place on October 30 and another performance will take place on December 4.

La Traviata was first staged in March 1853, and it is now more than 16 years since the original version premiered at the Bucharest National Opera. Giuseppe Verdi’s work is today the most frequently staged opera in the world, and its composer’s oeuvre also the most performed, said Razvan Ioan Dinca, general manager of Bucharest National Opera, so a new interpretation of the libretto can be a challenge. But it is a challenge that director Paul Curran embraced, as no one had invited him to stage a new La Traviata until this February, when he agree to bring Verdi’s classic opera to the Romanian stage.

The plot is well known, telling the story of a courtesan who lived in Paris in the first half of the 18th century. Traviata means fuori della strada (to depart from the right path), adds Curran. Along with choreographer Gary McCann, he came up with an original and provocative take, transposing the action from 1700s Paris, where Verdi set his story, to the 1950s. “The last really conservative era in the West was the 1950s, when a sex scandal involving an independent woman could be understood,” said the director. That decade also allowed the preservation of social nuances that would resonate with contemporary audiences.

Some see the 1950s in Paris as the pinnacle of cultural, social, intellectual and artistic creation, a period perfectly defined by the French with the expression “savoir vivre”. Against this backdrop, Violetta Valery represents a world of luxury, beautifully put in context by both director and choreographer. “What the 1950s allowed us to do was to make the story more modern, clearer and more relatable to the audience. People no longer feel the same social pressures from their families as they did in those times or in the times of Dumas,” McCann told Business Review. The story of La Traviata was based on the novel The Lady of the Camellias, written by Alexandre Dumas Jr, son of the iconic French writer.

Light pastel chromatic tones and luxury elements, such as costumes inspired by fashion designers Charles James and Christian Dior and plush violet embellish the performance. “It’s a story that emerges in the middle of the 18th century, and it is supposed to be lavish. People were supposed to say, ‘Wow, how can you afford to live like this?’, because the character is presented as a high-class courtesan. So we created something that is quite opulent but baroque in style,” outlined McCann. The team also put together everything for the staging from scratch, with a very talented Romanian team of designers, he noted.

“The décor is an ensemble for the protagonist’s own world. All four facades are there, thus building a kind of fragility in the way it looks because it doesn’t seem permanent or likes it’s strong architecture,” said the choreographer.

The story outlines the tragic fate of a controversial young Parisian beauty, originally called Marie Duplessis but renamed Violetta Valery in the libretto. A courtesan, she is a rapacious seductress of wealthy men. “Violetta has chosen this life for herself. (…) When a woman of society has to make a choice between getting married, being a nun or being a prostitute, I think that’s quite difficult,” said the director. The choreographer added, “The thing to remember about her is her youth. She is a very beautiful woman who dies very young. Think of her in the most glamorous way.”

Both Romanian Aurelia Florian and Canadian Siphiwe McKenzie make impressive Violettas, from voice to costume and performance. The audience particularly liked the touch of the character using no make-up in her stricken final act.

The Bucharest National Opera building underwent a reconstruction process last year, but it was only this summer that work moved to the main hall. Unfortunately, the workers were not able to finish the interior facelift before rehearsals for the premiere, meaning the performers faced trying conditions, enduring industrial noise, dust and cold while the heating system was replaced. “I knew it was going to be a challenge as director because it has been performed for 160 years and everybody knows Traviata. To stage Traviata you have to have an opinion, and mine was quite strong: just to tell the story – this human and fantastic story – in a very dramatic way,” said Curran at a press conference. “Another challenge we had was regarding the reconstruction, but it appears this is something that happens to me, as it’s not the first production which I’ve done in an opera house where reconstruction was underway.

McCann added, “I think every opera production has its challenges when you do it on a big scale with a lot of people and a lot of different processes. For me the challenge was to ensure the quality of the carving, so we had to look around to find the right people to provide us with that service and I’m very delighted with what they created. Up closer it looks like a film set and the quality of the finishes are really fantastic. But it’s a challenge getting to that point where you can have the right process.”